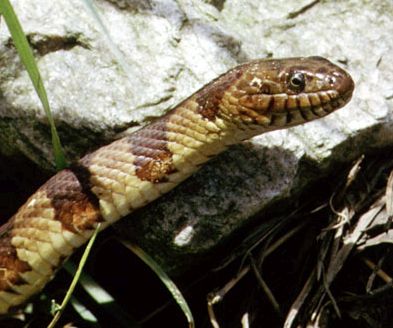 Queen snakes are gentle but squirmy water snakes with unique colors. They are not female king snakes, but belong to an entirely different taxonomic genus and family. 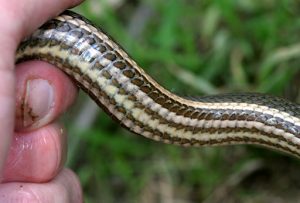 Queen snakes are about 2 feet long (big ones might reach 3) and have grayish/olive backs with stylish – lip to tail – yellow stripes on each side (scale rows 1 and 2 to be specific).  They have 4 long brown parallel lines further under their belly.  This pattern is unique, no other snakes have 4 stripes running the length of their belly.  Young snakes show all 7 stripes but older snakes lose their youthful good looks.

The yellow lip scales on a Queen snake are large and tough, perhaps an adaptation to the snake’s feeding habit of poking their face into rocks and gravel.

Queen snakes are extreme dietary specialists; no crayfish, no queen snakes.  They don’t like the crunchy ones, they only eat recently molted crayfish.

Queen snakes are not very common but can be found living along shady, rocky waterways with gentle riffles and little silt.  They love to bask in the morning sun, so I would find them among the rocks on the western side of the river.  In the evening, they would seem to switch to the east side for their solar energy.

What Northern Water Snakes Are

The Northern Banded Water Snake is common in most of the Fox River watershed’s watery areas: ponds, lakes, marshes, and of course, the Fox River itself.  They are snappy 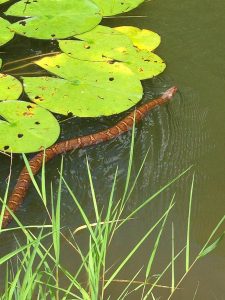 creatures and deliver a rememberable bite to the inexperienced field herpetologist. Importantly, they are non-venomous.

Obviously, banded water snakes do not have stripes, they have wide, dark brown bands on its wide back.  These snakes are often wrongly identified as the venomous water moccasin.

My entire career I’ve heard about water moccasins being seen in northern Illinois; from Lake Shabbona State Park to the Fox, Illinois, Kankakee, Des Plaines, and DuPage Rivers.  The closest water moccasins live 300 miles away, and anyone who says they live closer knows very little about snakes.

Northern banded water snakes are extreme dietary generalists.  They’ll eat anything they can grab and swallow from all the food groups: fish, birds, mammals, reptiles, and amphibians.