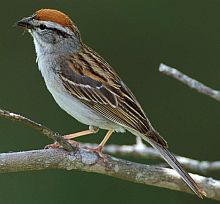 Every April, a paranoid little bird appears in my yard.  He perceives his adversaries everywhere he turns.  He then feels compelled to physically confront these interlopers with every fiber of his 0.43 ounce body. Unfortunately, he is seeing his own reflection.  He cannot comprehend that he is the bird in the gazing globe, hubcap, rear-view mirror, window, and chrome bumper. He is one silly sparrow.

The insecure ways of this male chipping sparrow are only beginning.  After he has attracted a mate, he doubles down on his distrusting thoughts.  He becomes so focused on keeping her to himself, that he will not lift a wing to help her construct the home for their offspring.  For four days, as she carefully places twigs, weaves grass, and brings soft animal fur to the nest, all he will do is stand very close; making sure everyone knows he is with her and keeping an eye for his competition.  You know the type.

Chipping sparrows are fairly easy to identify.  They are sparrows with a russet cap, pinkish bill, and rakish stripes – white over and black through – the eye.  One field guide said they appear “crisp and clean”.  They are attracted to shrubby (particularly evergreen) backyards that have oft-filled birdfeeders with spilled seeds on the ground.

Chipping sparrows are found coast to coast and their numbers are wonderfully secure.

I have a 50 year old list created by great Chicago ornithologist and Museum pioneer Bill Beecher that says April 20 is the traditional return date for chipping sparrows to our area.  More current records show these small birds now arriving in our area a week earlier, but I’m a traditionalist and my calendar will always have “Look for chipping sparrows” listed on 4/20.