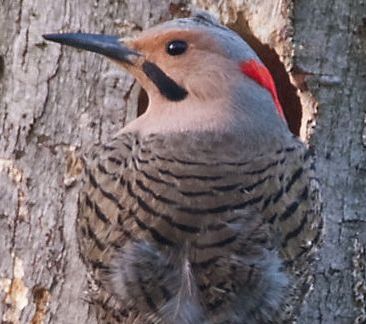 Flicker meat tastes like ants.  I doubt I will get the opportunity to verify this (I would do it in a heartbeat) but times, tastes, and sensibilities have changed. The topic of tasting flicker meat was first raised by universally famous naturalist and artist John James Audubon, who would routinely taste his subjects, after removing their feathers and skins, of course.

Flickers dig the formic acid.  They consume more ants than any other North American birds; examinations of their stomach reveal thousands of ants being consumed during the day. Flickers – and other birds – also rub ants all over their skin and feathers.

Migrating male northern flickers arrive at their breeding grounds in the spring, a few days before the female.  Flicker courtship is a lively affair with energetic head bobbing and tail fanning among several individuals. You can tell the boys from the girls by the presence of (boy), or lack of (girl), a moustache, or more accurate, malar stripe. Flickers need mature trees to raise their families. And they need dead trees too! Rotted logs provide both housing and feeding stations.

Flickers vex taxonomists.  Our local species is the widespread northern flicker, Colaptes auratus.  In most of eastern North America, northern flickers are the yellow shafted form.  Northern flickers in the west belong to the red shafted form.  Besides the color in the feather shaft, the males in the east have a black malar stripe; in western males the stripe is red.  Intergrades appear frequently with various shades of red, orange, and yellow.

Like most woodpeckers, flickers are fairly large, loud, and uniquely colorful. Unlike the typical black and white woodpecker garb, northern flickers have a fascinating color pattern of black polka dots, bars, and crescents across a buffy background. Both male and female have a red crescent on the nape of their necks. The shafts of their flight feathers are bright yellow. Flickers are stunning when seen from below. Flicker vocalizations add an exotic, Tarzan-like soundtrack to our woodlands. Their call is a ringing, repeating kwik kwik kwik kwik kwik kwik kwik often followed by loud drumming on a hollow log. This audio is the territorial call of a male Northern Flicker. 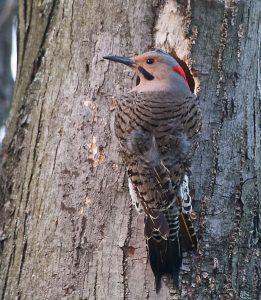