Today’s “Meet Your Neighbors” will look at 2 obscure and uncommon plant species and how their ancient names have been memorialized in popular culture, namely Calvin and Hobbs and The Simpsons. 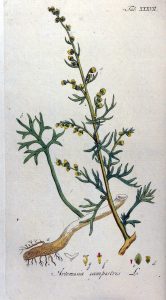 Calvin (no last name was ever given)’s educator adversary was Miss Wormwood.  In botanical circles, wormwood refers to a small group of plants in the large, diverse genus Artemisia.

Our Fox River neighbor is beach wormwood, Artemisia campestris, a plant occurring places where sand soils were deposited by the Wisconsin glacier 18,000 years ago.

Interestingly, beach wormwood is a biennial perennial. Their span of life is short. During Year One, the plant appears as a rosette of short, grayish-blue basil leaves. In Year Two, the plant will bolt, sending up tall (20” to 40”) flowering stalk with red or green stems and branches. The seeds will be produced during the summer and the two year circle of life will repeat.  Canoeists and kayakers could encounter these plants on the rocky shores and gravel bars as they cruise the Fox River.

Beach wormwood has some famous European relatives.  The culinary herb tarragon Artemisia dracunculus is an important component of French cuisine.  The flowers and leaves of Artemisia absinthium (along with anise, fennel and other herbs) are used to provide the distinct flavor to the 19th century drink of legend.

No teacher in the history of television has appeared more often the Edna Krabapple, from the 4th grade classroom of Springfield Elementary

School.  Her students include Ralph Wiggum, Milhouse Van Houten, and of course, Bart Simpson.  Less famous is the Prairie Crab Apple (Malus ioensis), one of only three native apple tree species of Illinois.

Prairie crab apples grow along the sunny edges of woodlands and along old fences throughout the area.  They’re skinny, short, and shrubby with the typical pink blossoms of apples trees.  Blooming apple trees are important sources of pollen and nectar for a wonderful variety of long-tongued bees.

The tree will make little green apples (and it don’t rain in Indianapolis) after the blossoms are gone.  The fruits will grow to 1” in diameter before falling to the ground and being consumed by all creatures’ great and small.