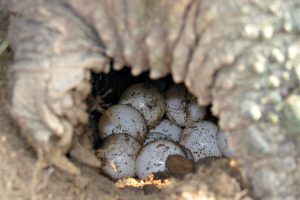 The eggs have all been laid.   Many thousands of the white spheres are now buried in our parks and gardens.  They look like ping pong balls.  The eggs were deposited in subterranean nests by our largest local reptile, the common snapping turtle.

Common snapping turtles are truly common.  They live in all permanent bodies of water including ponds, lakes, streams, rivers, ditches, canals, marshes, and golf course water hazards. The males rarely leave the water, the female only trudge out of the water to lay her eggs, before returning to the aquatic home.  Young female snapping turtle can start to lay eggs around age 11 or 12.  She will lay an average of 20 to 50 eggs a year for the next 20 years.

Of course, only a few snapping turtles survive to adulthood.  Raccoons and skunks both eat turtle eggs in the nest.  Newly hatched turtles are snacks for cranes, herons, and mink. 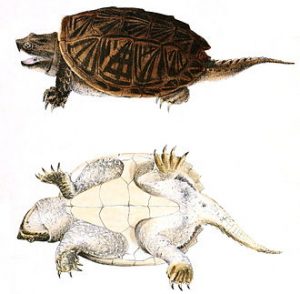 The eggs will develop during the heat of summer. Depending on external conditions, some eggs may hatch and crawl to the surface.  In other years, turtles may stay underground during the winter, emerging the following spring.   Recently hatched turtles are often found a considerable distance from water, but they do have the good instincts to head down hill to find water.

In many turtles, sex is determined by the temperature during egg development. Typically, lower temps produce males (28 degrees C and under = boys are cool) and warmer temps produce more females (30 degree C and over = girls are hot).  In a nest, eggs on top are more often females and eggs at the bottom are males.  Interestingly, snapping turtles usually develop as females during cold seasons that average 20 degree C, as well as warm temps.

Snapping turtles are completely omnivorous, eating everything they can grab. They eat aquatic plants, fish, birds, and mammals. They eat 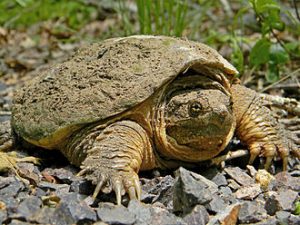 A snapping turtle out of the water is combative and aggressive.  In water, snapping turtles avoid confrontations with people and tend to flee swimmers.  In honor of the 50th Anniversary of the Woodstock Music and Art Fair’s 3 Days of Music and Peace, here is a tale from author Richard Conniff that I found in my files: 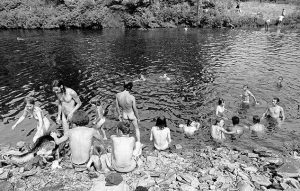 soup market. One of his stops was at the site of the legendary 1969 Woodstock music festival. A week after festival goers happily went skinny-dipping there, Rogers collected several dozen snapping turtles, averaging 20 pounds apiece, from that same pond. They never bothered the swimmers.