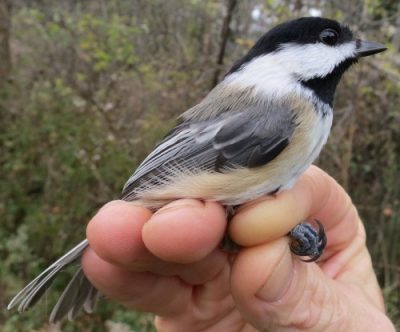 Our wildlife neighbors adjust to the approach of winter in various ways.  Some creatures migrate (red bats), some hibernate (fox snakes), and some grow a layer of insulating fat (raccoons and many humans).  And some birds grow big brains. 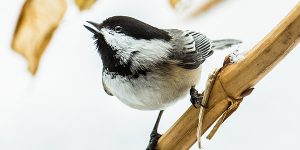 Seriously.  Long ago, scientists learned that black capped chickadees’ brains expand during autumn when the birds are required to memorize the location of the many thousands of seeds they have been storing.  The hippocampus (the portion of the avian brain used for spatial memory) of the chickadees exhibit adult neurogenesis, adding 30% more functional neurons in the brain as winter approaches. 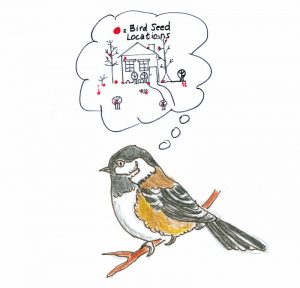 cues to recall the location of their seed caches.

In one of the more unsettling scientific experiments on animal behavior, scientists learned if a chickadees hippocampus is damaged, the birds will still hide their seeds but not remember where they are.

Chickadees are one of the most common birds in the Fox River Valley. They frequent shrubby backyards, degraded industrial parks, as well as wooded natural areas.  They are a bird that everyone should be able to identify by their distinctive black cap and throat with white cheeks.  Males and females are identical and they don’t change plumage seasonally. 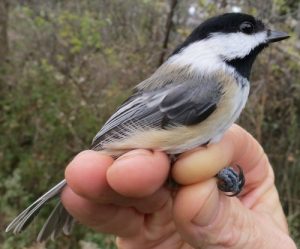 Chickadees of suburbia have become accustomed to eating from feeders.  They travel in small flocks (6-12 birds), moving from one food source to another.  In many neighborhoods, generations of chickadees have rarely foraged from the natural landscape.  This phenomenon has raised the concern about chickadees becoming dependent on feeders and may “forget” how to gather seeds in the wild.

No worries, studies on Wisconsin chickadees show in most winters, chickadees have no difficulty finding sufficient sources of food from the local flora, even after feeders were removed.  However, when severe winters do occur, feeders provide an easy source and can help many wild birds survive.

Researchers found in Wisconsin that chickadees were getting less than 25% of their energy requirements from feeders. In addition, a study in Maryland found that birds depend primarily on natural food supplies.

The Wisconsin study also found that when chickadees in a remote area suddenly had their feeder removed in the middle of the winter, they found natural food as readily as their cousins who never had eaten from a feeder. The two groups survival rate was the same.

For more on feeding wild birds read this report on “The Dynamics of Bird Feeding“. Note that the report’s publisher “The National Bird Feeding Society” is supported by Wild Bird Centers of America, Inc. , a national franchisor of wild bird specialty retail stores.