Locally, house finches congregate at bird feeders filled with sunflower and safflower seeds; they’re often the most numerous birds at a feeding station.

Interestingly, our House Finches are all recent new comers.  It was not until the very end of the 20th century that these birds came to the Fox River Valley, arriving from the east like pioneers.

The story of the house finch’s range expansion is a well-documented lesson in science and human behavior that began in the 1930’s.

The House Finch, Carpodacus mexicanus, was a bird of the riparian areas of northern Mexico and southwestern United States. Through hunting and pecking, they would eat a great variety of seeds, grains, fruit, and berries.  These birds nested in the shrubs along the waterways of the Sonoran Desert at the beginning of the 20th century.

An unknown person(s), at an unknown location(s) at an unknown time, decided these birds (at least the males) could be sold as pets to people in New York City.  This person, or someone else, also gave the birds a name with more pizzazz – Hollywood Finches.  Pure marketing genius. 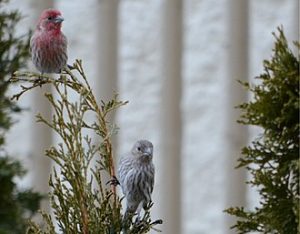 For several years, pet shops in New York City sold Hollywood Finches to pet bird fad patrons. Business was lucrative; the hearty, cute (male) birds from California could be bought for $35.00 per hundred and fed seeds.

But the glory days of selling Hollywood finches did not last long.  When a Dr. Edward Fleisher of Long Island saw 20 caged Hollywood finches (and numerous Bohemian Waxwings) for sale in a Brooklyn store in 1939, he contacted the National Audubon Society to blow the whistle on this crime.

The Audubon Society flew into action.  Twenty pet stores surveyed by the bird group all carried the fake named migrants.  When investigations of the illegal practice (due to the Migratory Bird Treaty Act), were announced in 1940, nervous store owners eager to avoid persecution, quickly released the birds rather than being caught.

In April 1941, 2 experienced birders reported a male house finch at Jones Beach, on Long Island in New York.  The bird was seen 4 more times during the month by numerous observers.

On May 28, 1943, the first nest of house finches east of the Mississippi River was found.  This was 1500 miles away from the next closest breeding location.

By 1949, there were multiple colonies, each containing more than 70 birds, in Long Island and Greenwich Township Connecticut.

Over the decades the house finch range expanded.  A few individual house finches reached central Illinois in 1971.  A big expansion occurred in the 1980’s and they exploded across northern Illinois.

If you throw some a few handfuls of safflower seeds on the ground near some shrubs, you might attract them on to your little part of the world.