Birds, Bales and Waters of the United States 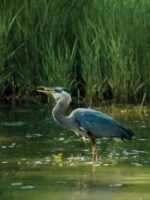 When Illinois became a state in 1818, 8 million acres of wetlands or 23% of the state’s land area provided critical habitat for a wide variety of mammals, birds, fish, mussels, amphibians, and insects. Today only 1.2 million acres remain. 90% of Illinois’ wetlands have been destroyed!

The new administration’s attempt to roll back the Clean Water Rule, also known as the Waters of the United States Rule, threatens much of what’s left.

There Goes the Neighborhood!

On Tuesday, February 28, 2017 the President of the United States directed the Environmental Protection Agency (US EPA) and Army Corps of Engineers to review and reconsider a 2015 rule known as the Waters of the United States  (or Clean Water) Rule. Removing the protection of the Rule could make it easier for farmers and developers to drain wetlands and pave over small streams.

The Clean Water Rule was issued under the 1972 Clean Water Act. It gives the federal government broad authority to limit pollution in major water bodies as well as in streams and wetlands that drain into those larger waters.

Lawsuits in Federal District courts and the U.S. Supreme Court have created confusion over exactly which waters fall under the Clean Water Act. This led US EPA under the Obama administration to issue a clarification of the Rule. In spring 2015, US EPA finalized the Clean Water Rule and offered clarifications. US EPA’s website now clearly lists what is protected and what is not.

This story made national news but few people living in the Fox River valley know how, or where, part of this historic environmental story took place in the Fox River’s watershed. The conflict and confusion began in Bartlett! Oddly, this local story begins with a very international bird.

The veery (Catharus fuscescens) is a very American bird. Veeries spend the winter in the South American rain forest. When spring arrives, veerys head to their summer homes in the woods of North America 3,500 miles away! A radio telemetry study of this night flyer’s migration showed the little veery can fly up to 160 miles in one night at altitudes more than a mile high. 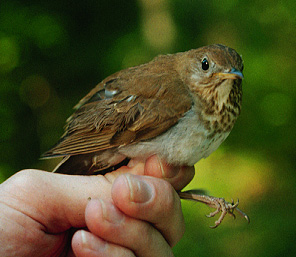 in Illinois in late April and early May, the veery finds itself on the state’s list of threatened species. The breeding population in Illinois is small and its critical habitat is disappearing. The Illinois Wildlife Code protects the veery in our state. The federal government protects it by international agreement under the Migratory Bird Treaty Act.

When they arrive in the Fox Valley, veeries like to flirt, mate, and build their summer homes in disturbed forests where dense low shrubs provide protected nest sites. That’s why every year, for decades, they’ve been raising their babies in an old gravel pit in Bartlett.

With a sexy name like that no wonder people, reporters, and lawyers call it SWANCC. This intergovernmental agency provides solid waste management services to its member communities; twenty-three towns from Arlington Heights to Winnetka in northeastern Cook County. In plain English that means SWANCC hauls away their garbage and buries it in landfills….elsewhere.

In 1990, SWANCC bought a 533-acre former gravel strip mine in Barlett for five million dollars with the intention of 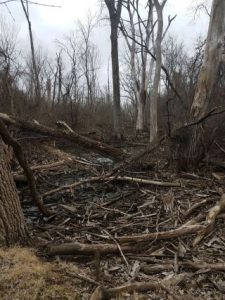 turning it into a “balefill”, a dump for “baled” garbage. Since mining ended in 1960 the excavation trenches on the site evolved into ponds ranging in size from a few feet across to several acres. So SWANCC had to obtain permits to fill the ponds and develop the property.

SWANCC obtained local and state development permits, but the US Army Corps of Engineers denied SWANCC’s permit application to dredge and fill a wetland because, in this case, SWANCC wanted to fill in more than 900 wetlands!

SWANCC sued the Corps saying the ponds weren’t connected to “Waters of the U.S.” so they didn’t need a permit to fill them.

In the ensuing lawsuit that wound up at the Supreme Court the Corps stated: “the (intended use) would cause “unmitigatable“ damage to the woodlands and wetlands on the site, a former gravel pit that is now home to a rare colony of great blue herons and the veery, a small bird that is endangered in Illinois.” The Corps also stated that SWANCC “inadequately investigated smaller alternative sites that would suffer less environmental damage.”

On January 9, 2001, the Supreme Court limited the rule’s reach when it decided that the Clean Water Rule does not protect “isolated ponds” with no significant connection to “Waters of the U.S.”. Now the Trump administration wants to eliminate the Clean Water Rule in its entirety.

Standing in the Oval Office surrounded by farmers, home builders and county commissioners applauding his directive, the President said  “this very destructive and horrible rule…should have only apply to “navigable waters” affecting “interstate commerce.” Trump said: “A few years ago, the EPA decided that ‘navigable waters’ could mean nearly every puddle or every ditch on a farmer’s land, or everywhere else that they decide.”

Bob Irvin, president of American Rivers states: “Without the Clean Water Rule’s critical protections, innumerable small streams and wetlands that are essential for drinking water supplies, flood protection, and fish and wildlife habitat will be vulnerable to unregulated pollution, dredging and filling”.

Illinois wetlands provide breeding, nesting, forage, and protective habitat for 40% of the State’s threatened plants, birds, and animals. Illinois’ Dept. of Natural Resources estimates more than 150,000 acres or 12% of the remaining of the state’s remaining marshes, bogs, fens, sloughs, ponds and prairie potholes, would become vulnerable to development if US EPA eliminates the Clean Water Rule.

SWANCC sold a portion of the proposed balefill site and recovered some of its purchase and litigation costs. The Illinois Department of Natural Resources bought the gravel quarry portion of the site with its 900+ isolated wetlands and named it Herons Woods State Habitat Area. Closed to the general public to protect the native and migrant species that have come to depend on this large chunk of isolated and varied habitat, it is open to licensed hunters during some hunting seasons.

The SWANCC case reduced federal environmental protections for isolated wetlands throughout the United States. But the original, disconnected, disturbed, overgrown old gravel pits of the Bartlett Balefill still provide a safe summer home for hundreds of species, including the verrys that fly thirty-five hundred miles to get there.

On Saturday, May 13, 2017, (when the Veeries are mating), Friends of the Fox River will conduct a tour of the historic “isolated ponds” in the former gravel pit and proposed SWANCC “Barlett Balefill”, which is now Herons Woods State Habitat Area.

The tour will begin at 9am and end before 10:30am. Naturalist and master storyteller Jack MacRae and Gary Mechanic, Friends of the Fox River’s Executive Director, will explore the significant connection between “Birds, Bales and the Waters of the United States” in an entertaining and environmentally educational hike.

Tickets are $25 per person. This tour is not recommended for children and is not wheel chair accessible. Tour details will be emailed to registrants.

Ticket sales for this event has ended.

1 thought on “Birds, Bales and Waters of the United States”