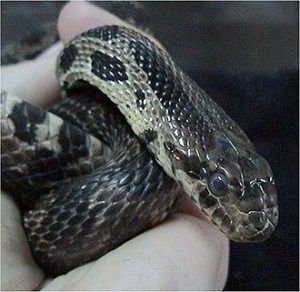 Fox Snakes in the Fox Valley

Fox snakes hatch hungry. During the summer, baby mini-constrictors use their egg tooth to cut a slit from inside their egg. After emerging, they’ll shed once before heading off to hunt for newborn rodents. They grow fast and furious (to a length of 40 inches in a few years) making them the biggest native snake of the Fox River Valley.

This month’s featured “Meet Your Neighbor” is the “western fox snake” (Pantherophis vulpinus). It is found in northern (but not southern) Illinois and in a small area of Indiana. The closely related eastern fox snake lives southeast of Lake Erie.

Beautifully camouflaged, Fox snakes have chestnut brown saddles on a tan background with a distinct checkerboard belly. They vibrate their tails when nervous, a habit that terrifies nervous onlookers and often leads to this harmless animal being killed. 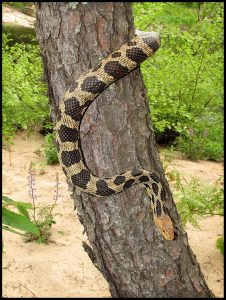 Historically, fox snakes did not suffer during the first human invasion of the Fox River Valley. The early farms attracted more mice than similar sized natural areas and fox snakes found excellent shelter living under old boards. The next wave of development –from rural farm to strip mall suburbia – has been hard on them. Today, fox snakes can still be found down on the old farms and in the preserved lands where people rarely tread.

Fox snakes live in decent numbers in isolated areas where they have been for many generations. No snakes are “expanding” their range around here. They’re still in most DuPage Forest Preserves so I assume they’re in most Kane County preserves. Good habitat would have lots of voles and mice, lots of old boards on the ground for shelter, and ideally, old basements, bridges, and silos for hibernacula.

I would describe fox snakes as evidence that God is wonderful and wants us to be happy.
Written for Friends of the Fox River by Jack MacRae