Meet Your Neighbors: “The Lives of Grass” 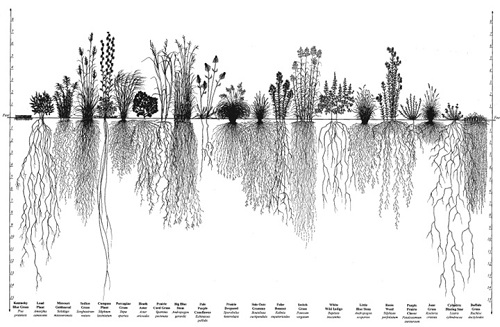 “The Lives of Grass”

There are many grasses in the Fox River Valley; tall types, short types, native and introduced. Here are three short biographies.

Through the lens of a magnifier, sideoats grama, Bouteloua curtipendula has some of the prettiest reproductive organs you can find in nature; feathery white stigmas and crimson anthers dangling on a zig zag stem. This gorgeous grass loves it hot, and established clumps are able to tolerate extreme drought. It is often one of the dominant grasses on dry hilltop prairies.

Sideoats grama is typically listed as a member of the short grass prairie ecosystem that is found 700 miles to the west. Researchers believe sideoats grama actually expanded its range during the Dust Bowl years of the 1930’s, moving east and taking hold in appropriate habitat. The reliability of their oat like seeds – and those pretty anthers – makes the plant popular with prairie restorationists and native gardeners.

The aptly named porcupine grass, Hesperostipa spartea, produces a hard, sharply pointed seed attached to a long  slender “awn” that rises from the leaves. At the end of the growing season, porcupine grass bends over and drop their seeds and awns. Fluctuations in relative humidity cause portions of the awn to twist into a helix (when dry) and straighten (when moist). This rhythmic motion effectively drills the seed into the soil. Porcupine grass is a cool weather grass that does most of its growing in the spring and fall. It grows in a variety of

prairie habitats and is common in northern Illinois. It is not found in the southern half of our state. Confusingly, our native porcupine grass shares the name as a popular garden “maiden” grass of the genus Miscanthus.

I would guess the vast majority of homeowners and small business in the Fox River watershed have lawns of Kentucky bluegrass. It also covers our parks and recreational spaces. There are thousands of square miles of the stuff. It is a high maintenance, short rooted grass that has a nice blue hue when it grows to its expected 24 to 36 inches. But most people don’t allow it to grow more than 3 to 4 inches high!

The early English colonists brought the plant, along with countless others, to North America. It was used to feed livestock and, when neatly trimmed by hungry sheep herds, created a pleasing look.

Shortly after the Civil War, influential landscape architect and city planner Frederick Law Olmstead promoted the idea of single family homes surrounded by tidy bluegrass lawns. It is no coincidence the lawn sprinkler was invented in 1871. Pioneering landscape designer Frank Scott once wrote: “A smooth, closely shaven surface of grass is by far the most essential element of beauty on the grounds of a suburban house. Let your lawn be your home’s velvet robe, and your flowers its not too promiscuous decoration.”

The plants and animals of the world are no longer isolated to their original range and we can now choose the plants we want surrounding our houses whether they’re native or not. The trend of replacing Kentucky bluegrass with native grasses, in “The Prairie State” will help our local ecosystem return to its deep “roots” 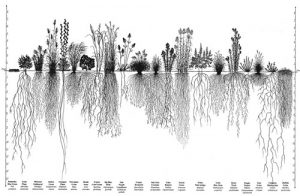