Meet Your Neighbors: The Duck with a Golden Eye

Goldeneyes don’t dabble. They are diving ducks with a talent of Olympic proportion. They’re synchronous divers. When feeding, all the birds in one section of a flock may dive at the same time. They swim to the bottom of lakes and rivers in search of crunchy food. Analyses of their stomach contents reveal they eat a lot of crayfish. Every winter a few goldeneyes pursue their crustacean prey along the Fox River near Batavia.

Male goldeneyes have a dark, glossy, green head with bright white cheek patches. Their plumage is a resplendent black and white.

The female has an attractive soft gray body with a chocolate brown head. They have small, round eyes; I am not going to tell you the color of their iris.

Snowbirds of a Feather

A fast flyer and known by human hunters as a wary bird, goldeneyes avoid dangerous situations and linger only in those places they feel secure. They rarely mingle with other ducks, preferring to swim only with their own species. Interestingly, it appears on average a male adult goldeneye will spend the winter further north than adult females, who in turn will winter farther north than first year birds.

Love on the River

It is during their winter vacation to the Fox River Valley that common goldeneyes will gain a new appreciation for the opposite sex. The drake starts a long, elaborate courtship ritual by a long stretch of the neck, a quick backward thrust his head, and a few swift kicks with his webbed feet. The hen will bust a few moves of her own and – eventually – choose her lucky duck. In all, duck ethologists have described 14 different breeding and courtship behaviors associated with goldeneyes!

Eventually, winter will end and the goldeneyes will leave. The ladies go first, followed quickly by their chosen partners, and then followed by unattached males. They’re on their way to their Canadian tree houses. Goldeneyes are cavity nesters and have a strong tendency to use the same hole each spring. They produce ducklings only once each year.

It’s all about the Moult

I’d like to address the term “ugly duckling”. Ducklings, juvenile ducks in their fluffy, downy stage, are undeniably 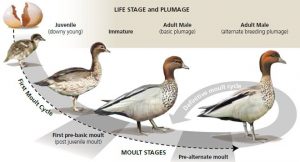 adorable. But then they moult and lose their cute. It is during this stage, when the young bird has completed its “first pre-basic” moult, where they appear gawky (and they feel deeply self-conscious). Like being a teen, it’s a temporary thing. Soon they’ll complete their “post juvenile” moult. Finally, they attain their full adult, dignified, goldeneye duck plumage.

In sum, first ducklings are cute, then they’re ugly.