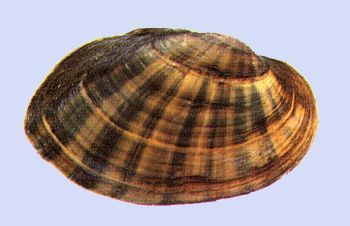 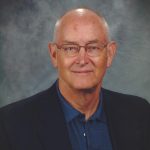 It has been 100 years since the passage of Illinois’ Sanitary District Act of 1917. That Act allowed voters to petition for a referendum to form a sanitary district and build treatment plants to “conduce to the preservation of the public health, comfort and convenience”(1).  Since that Act’s passage great strides have been made in science, engineering and legislation which, with wide public support, have protected from further degradation and subsequently improved Illinois’ waterways, including our Fox River.

Currently many tens of millions of dollars have been and are now being invested by municipalities and sanitary districts along the Fox to reduce phosphorous discharges. Phosphorus is an important nutrient contributing both to unsightly algae growth in the Fox and ultimately the growth of the “Dead Zone” in the Gulf of Mexico. But the enhanced phosphorous removal facilities now planned and under construction might not be enough to solve the algae problem of the Fox.

What’s interesting about the mussel? These aquatic friends and workers are now recognized as both an indicator of, and potentially an important contributor to, a clearer and cleaner Fox.

Mussels lay quiet and inconspicuous, almost completely buried in the sand and gravel beds of the river’s bottom. Little more than the mussel’s siphon, sucking in river water for its essential food and oxygen supply, is exposed to the river current.

It has been estimated the Illinois River once held nearly 50 species of mussel (2). The Fox wouldn’t have been far behind. Freshwater mussels can live for fifty years or more. They are among the most sensitive aquatic organisms to certain water pollutants such as ammonia. Importantly, mussels may be among our river’s most important natural water purifiers.

Mussels are fantastic filter feeders! Mussels will typically bury themselves in a rocky or sandy riverbed until just the tip of their shell peaks out to expose their intake siphon. After burying to just the right depth in the riverbed the mussel’s siphon goes to work. 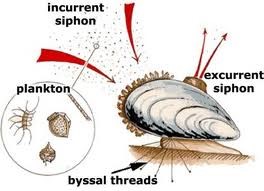 Mussels feed on plankton. Plankton is the broad technical term for the algae and small critters that make the Fox look dirty especially in the summer. With every “breath” the mussel’s siphon sucks in water containing plankton, filters out the plankton, then pushes the clear filtered water back out into the stream. These natural filters are tireless, dining on plankton 24 hours a day 365 days a year.

This time lapse video is a great demonstration of mussels’ ability to filter plankton: 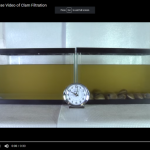 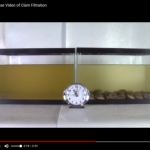 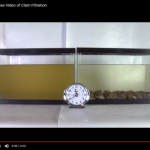 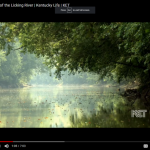 Licking River. While the Licking is not the Fox, the video shows clear similarities between the Licking and free running reaches of the Fox. The UK studies find there can be 40-60,000 mussels in an area the size of a football field! After watching the fish tank video above it is easy to imagine the potential impact on water clarity a healthy Fox River mussel population might have. Here’s that U. of K. YouTube link:

Only in the past couple of decades have mussels and their part in naturally clarifying river system waters begun to be appreciated. They once were seen to be simply an economic asset. In Elgin: Days Gone By by E.C. “Mike” Alft  (3) Alft relates Elgin’s “pearl fever” starting around 1908 where clam diggers were active for several years searching for freshwater pearls: “Clam diggers wandered the river banks and jewelers were kept busy appraising the finds. Professional pearl buyers made regular visits to the city…The clam diggers would wait until the river was low in the hot summer months, then wade in until their feet touched a clam.”

According to Roger Matile in his “historyonthefox” blog (4) the Kendall County Record reported in 1911 the Illinois freshwater pearl harvest was worth $2 million. That’s about $50 million in today’s dollars! In 1911 a button factory was established in Yorkville to compete with Muscatine, Iowa’s button industry for Fox River mussels.

Most freshwater mussels depend upon fish in their reproductive cycle. In a key stage of their life mussels (microscopic “veligers”) will hitch a ride on the gills of specific fish species for nutrition before dropping, fully formed, to the river bed. The following YouTube video gives an example of that dependency.

Absent any new or surprise water contaminants what appears missing and necessary to return the Fox’s mussels to their original populations is sufficient habitat.  While the Lampsillus featured in the above video may have some of its own unique characteristics, its reproduction mechanism is typical: a need for a pretty clean river bottom and the use of fish to nurture and spread their young

The Fox is not the long series of shallow pools and riffles it once was when mussels and their river cleansing actions thrived.  With improved 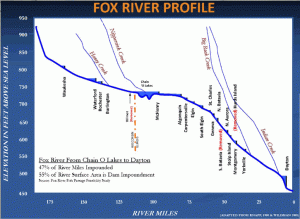 water quality and the long absence of mussel harvesting for many decades the failure of our mussel population to return is best explained by the Fox River dams. 50% of our Fox is dam backwater today where the river is slowed and silt routinely covers much of the bottom. These dams have greatly reduced mussel’s available habitat and interrupted their reproduction cycle by inhibiting upstream fish migration.

Whether or not a healthy mussel population can make the Fox run with pristine clarity, it is apparent mussels can be a valuable asset in reaching for that goal.

Wild freshwater Fox pearls will never compete with cultured pearls in the jewelry market today (or clamshells in today’s plastic button market) but Fox River mussels may have a new economic value. Plankton filtering mussels may be an important natural “technology” necessary to reach the goal of restoring the Fox to a naturally clear and productive waterway.

In addition to the “dirty” look, algae can also cause low dissolved oxygen levels that may harm fish and other aquatic life. Algae blooms are seen as a major water quality problem from the Fox River Chain of Lakes all the way to the dead zone in the Gulf of Mexico. According to the Fox River Study Group’s research, the over $100 million now being invested in new phosphorous removal technologies, while important, will not significantly reduce the algae normally responsible for the Fox River’s too often dirty look. A 1995 study by Singh reported algae concentrations in St. Charles’ Dam pool up to 43,000 cells per milliliter (5). That is over 160 million algae cells per gallon!

Further reducing phosphorous and nitrogen to levels necessary to prevent algae blooms in the Fox would easily cost additional hundreds of millions of dollars. Worse, all that extra money spent for the world’s best available technology still might not be enough (6). Reintroducing our friend Mr. Mussel on the other hand….

Consider the return on investment (“ROI”) of restoring these natural filtration phenoms by dam removal (7). Assume each dam along the Fox cost a million dollars to remove (likely lower). Further, assume the cost of the pollution control facilities necessary to do what mussels naturally do is at least $100 million (likely much higher). The return on investment for saved water purification costs alone by removing the Fox’s dams would be over 1,600 percent!

If the nation’s gross domestic product (“GDP”) considered a penny saved as a penny earned, then restoring our mussel population may easily be worth over a hundred million dollars of new GDP

Even better, removing dams will have additional bonuses. Removing the dams and freeing the Fox will also give us more and better fishing and birding and many miles of more beautiful shoreline.

Here’s a prediction: mussels will play a future key role in ultimately meeting the Fox River’s water quality standards and achieving the goal of making the Fox a fishable/swimmable waterway. Removal of the obsolete dams (or adding properly designed fish ladders for those dams not removed) will restore much of the mussel’s original habitat and help restore natural specie migration and reproduction.

The proliferation of a robust mussel community, reducing algae and other river plankton through their natural biofiltration process, will result in significantly improved water clarity and chemistry.  The free Fox will flow clear.