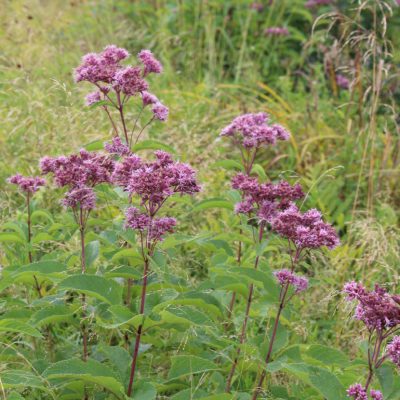 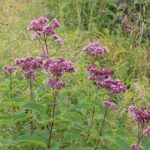 One of the great mysteries of American wildflower lore may have been solved. Joe Pye – the eponym for Joe Pye weed – appears to have been identified!  This is according to a fascinating article from the 2017 issue of The Great Lakes Botanist (Volume 56, Issue 3-4, July), by veteran Canadian botanist James S. Pringle and American botanist, artist, and all around wonderful human being, Richard B. Pearce. 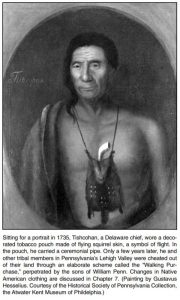 The authors contend – quite convincingly – that Joe Pye was the nickname of Joseph Shauquethqueat, a leader of the Mohican people living in western Massachusetts in the late 18th century. I trust the conclusions of Pringle and Pearce that Shauquethqueat and Joe Pye are one in the person.  What is still somewhat murky is the connection between Joe Pye the man and Joe Pye the plant.  Did the man truly promote the plant as a remedy for typhus?  Did it work?  The mystery lives on.

Today, there are countless natural history books and articles that tell legendary tale of Joe Pye, an Indigenous herbalist who used the plant as a remedy for the epidemics of typhoid that frequently broke out in the colonies.  Details, though, have always been sketchy.  Depending on the resource, this heroic Native American saved the lives of the pilgrims at Plymouth Rock, or soldiers during the American Revolution, or the citizens of early 19th century Massachusetts. Facts on this matter were not as important as a good story and few cared.

In recent times, a troubling, contradictory image of Joe Pye emerged. Namely, he was not an Indian. This divergent view culminated in the book Herb Gardening for Dummies, where Joe Pye was referred to as an 18th century Caucasian snake oil salesman who travelled the country promoting Native American culture and medicine. 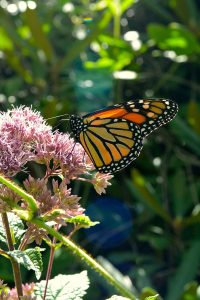 The uncommonly named Joe Pye weed is a common plant of North America, growing in open woodlands, savannas, and forest edges. This stately flower is also a familiar component of the trendy “pollinator gardens” that are all the rage; Joe Pye is quite popular with many of our prettiest bees and butterflies.

The scientific world first learned the official name of this plant in 1753 when it was described as Eupatorium purpureum. In that era, the common folk of colonial America did not care and called the plant trumpet weed, gravel weed, and purple boneset.

But soon the E. Purpureum had another common name and notable reputation: It was being used by an Indian healer named Joe Pye to treat typhus and referred to a Joe Pye’s weed.

The earliest record of E. purpureum also being called Joe Pye’s Weed is from “A Manual for Botany for the Northern and Middle States (2nd edition) put out by Amos Eaton in 1818.

Over the centuries, several other species of Joe Pye weed were identified. Science took a mighty step in February 2012 when botanical taxonomists moved Joe Pye weed from the genus Eupatorium to the genus Eutrochium.

Specifically, we have 2 species of Joe Pye weed in the Fox River Valley: Sweet Joe-Pye (Eutrochium purpureum) and

Spotted Joe-Pye (Eutrochium maculatum). They have similar structures – whorled leaves and a large dome of mauve flowers on 4 – 7 foot stems. Examine the stems to tell them apart. E. maculatum stems are purple-ish and hollow, while E. purpureum are mostly green and solid.