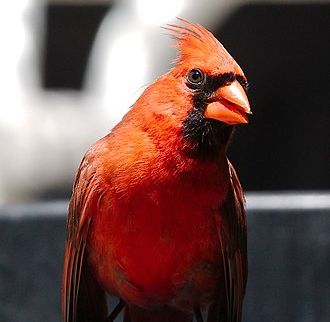 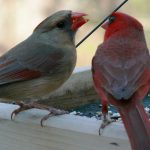 Everyone should be able to identify the northern cardinal. The boys are bright, bright red.  Their faces are black.  The girls are a fetching tawny brown with red highlights.  Both sexes are crested and have thick red beaks.

But cardinals are much more than just another pretty bird.

During the early 1980s, I had multiple opportunities to rummage through the dumpster outside the shipping dock at the Field Museum.  I acquired some very cool 19th century books on Illinois ornithology that date to a time when Passenger Pigeons were still alive and – to my complete surprise – cardinals were “a rare and irregular summer visitor” to northeastern Illinois. 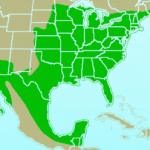 Avian historians have been able to document the cardinal expanding its range to the north for nearly 2 centuries.  Once a creature of the south and east United States, cardinals have crossed the northern states of Wisconsin over the past century and moved into Canada.  According to my sources, what could be currently November 2020) the farthest north cardinal is a male (in Bunn Creek Centennial Park on the north side of Winnipeg, Manitoba.

Cardinals don’t migrate.  Following the winter solstice, lengthening hours of daylight will slowly re-charge the male’s testosterone and affect their behavior.   Eventually, on a sunny winter morning, the male will find a prominent perch for his spring performance.  His loud clear whistle will both establish his territory and impress his mate.  They’re a close couple. She may join him in song, a rare bird display of a wild bird duet around the suet. 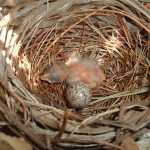 A songbird’s nest is often a short-term residence; but cardinals take empty nesting to a new level.  In a scant 22 to 24 days after being an egg laid in a nest, young cardinals will fledge and leave the protection of the nest.

Mom will often build a new nest and begin raising a new clutch while dad responsibly steps up his child care duties.

A Prince Among Birds?

Early European immigrants to North America gave the cardinals their name.  The bird’s red plumage reminded them of the red vestments worn by senior members of the Catholic hierarchy.  The crest may have been a factor.  One early name that failed to catch on was Virginia 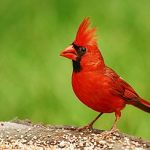 According to The Internet (https://www.ereferencedesk.com/resources/state-bird/illinois.html) the cardinal was made the official bird of Illinois in 1929 after receiving 39,226 votes. Schoolchildren selected this bird over the bluebird, meadowlark, quail and oriole.

I think children should be taught the names of our common birds from infancy.  Cardinals are a great place to start.