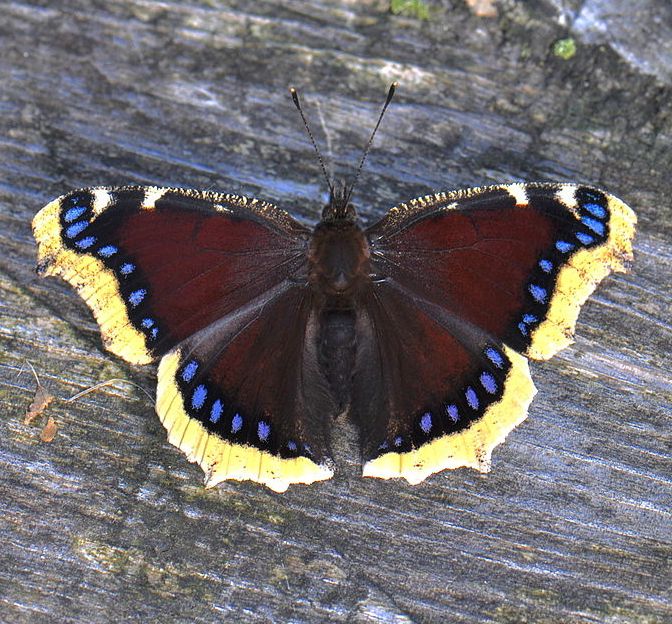 The perennial winner for the Longest Life Span Award in the North American Butterfly Category is our old friend the mourning cloak. This is one of the few local butterflies that hibernates as an adult. They have a sweet trick that extends their life span to an impressive 11 months!

Mourning cloaks practice a natural form of cryogenics (not cryonics!), relying on a self-made antifreeze, similar to sorbitol, to stay alive in sub-freezing temperatures. In late fall, they fold their wings and squeeze into the deep, bark furrows of mature trees. They’ll sit tight until the end of winter, when they un-freeze and flit about.

Mourning cloaks are among the small group of butterflies that don’t visit flowers. The brushy tip of their proboscis is best suited for soaking up nutrients from rotting fruit, fresh feces, and tree sap. These food sources are available to adult mourning cloaks during a time of year (late winter) when members of the “flower-visiting butterfly guild” have none. Indeed, during a warm spell in February or March, mourning cloaks leave their bark shelters and look for nourishment.

Mourning cloaks have big (3”), dark maroon wings with yellow borders. Their wings have small spots of iridescent blue near the edge. Mourning cloaks were named as their coloration was reminiscent of clothing worn by people during the stage of half-mourning in Victorian time. As everyone knows, during deep mourning, one must wear all black; but during half mourning, a small amount of yellow trim on deep purple may be worn.

Mourning cloaks are distributed across the northern hemisphere; they’ve even crossed the equator at times! Interestingly, mourning cloaks’ Latin name also changes around the world. Nymphalis antiopa are called papillon morio in France and the Camberwell beauty in England. Immigrants from Germanic speaking countries were likely responsible for its common name in North America.

Maple tree tappers will often encounter mourning cloaks flopping in the bottom of the sap buckets. They always say they add protein to the syrup.

All butterflies should have our respect but it’s not every day we have champions flying through the sunny woods of the Fox River valley.