A Visitor from the Far North 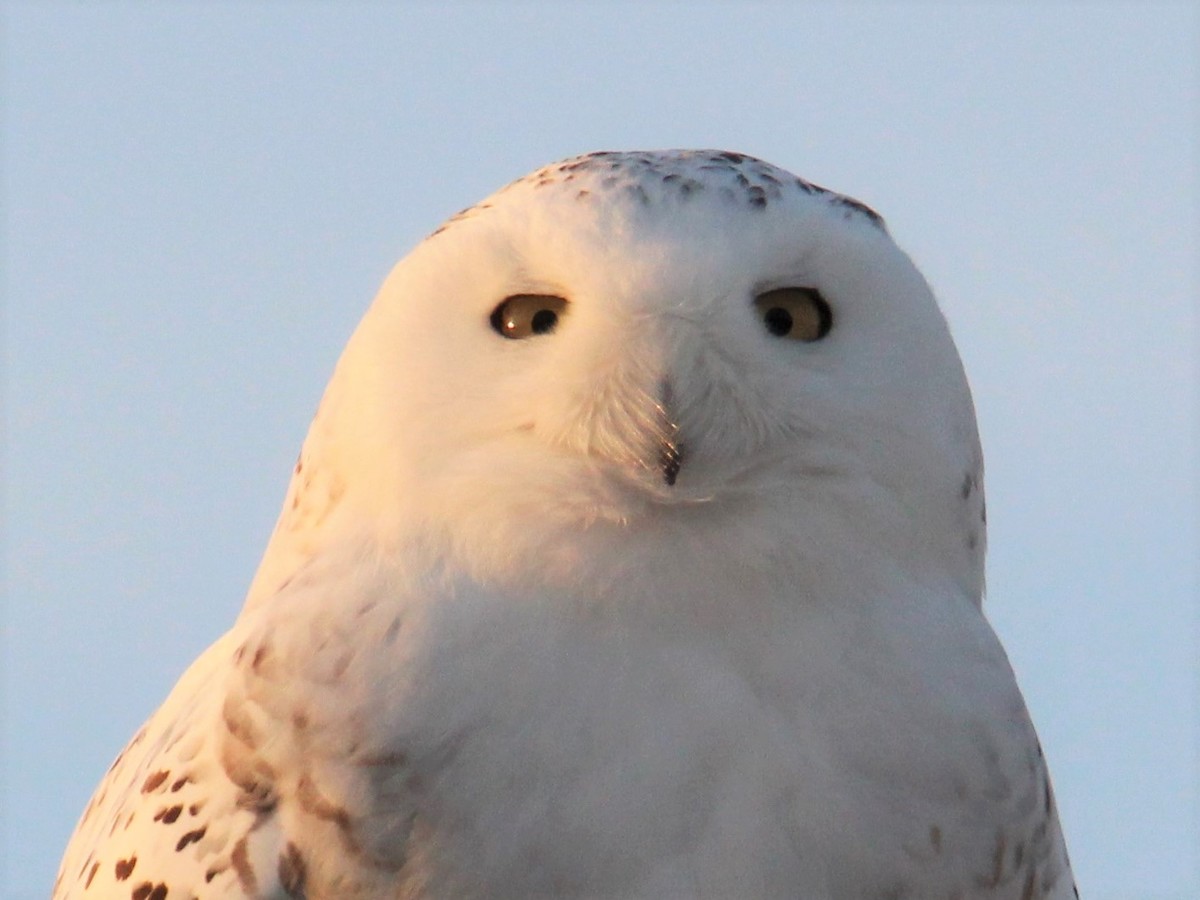 Happy New Year!  For this month’s blog I thought I’d write about one of my favorite winter pastimes.  It’s going on a treasure hunt of sorts exploring the cold and windswept Illinois prairies for a rare avian treasure, a visitor from the tundra of the Arctic north: the Snowy Owl (Bubo scandiacus).

The Snowy Owl is a strikingly beautiful bird and the largest (by weight) of the North American owls averaging about four pounds in weight while the Great Horned Owl (another spectacular bird) averages about three pounds in weight.  Our area of northern Illinois lies at the extreme southern limits of the Snowy Owl’s typical winter range.  The birds breed far above the Arctic Circle among the many islands of the Arctic Ocean and along the coast of Greenland.  Their typical winter range in North America extends throughout the provinces of Canada and the northern Forests and plains of the United States.  During what are called irruptive years, Snowy Owls can be found much farther south during in the United States during winter, sometimes as far south as Texas and Florida.

Irruptive years seem to be linked to cyclical fluctuations of the lemming population in the Arctic regions.  Lemmings are the favored prey of Snowy Owls within their range.  When the population of lemmings are down, the Snowy Owls seem to spread further from their normal winter range in search of other prey.  When they are in our area, they favor voles, mice, and other small mammals but will also prey on other birds.  In fact, Snowy Owls are one of the most agile owl species in flight and have been known to capture other birds on the wing.

While the Snowy Owl is an accomplished flier, they spend much of their time on the ground or perched on a fence post or other higher vantage point where they can survey the surrounding fields for potential prey.  Unlike other owls, Snowy Owls do most of their hunting during the daylight hours.  They have extremely well-developed eyesight and hearing and use those senses to home in on their prey.

A female (most likely) Snowy Owl perched on a telephone pole along a rural Lee County, Illinois road in March, 2021. We were lucky enough to find this beautiful bird perched high on this pole. I used a long lens to capture this and the previous shot as I didn’t want to approach the bird too closely and disturb her from her perch.

The plumage of Snowy Owls varies according to the age and gender of the bird.  Snowys that are almost pure white are always males.  Females and immature males have quite a bit of grey, black, and brown barring on a snow-white background.  As the males age, the barring lightens until it finally disappears almost altogether.  Heavily barred Snowy Owls are almost always females.

In northern Illinois, Snowy Owls start to show up in very late November and early-December and can be occasionally seen through March.  The shoreline of Lake Michigan is a hotspot for seeing these beautiful birds.  They can also be found in open farm fields in the western portions of the Fox River watershed and amid flat fields reminiscent of their native tundra of the North in areas just to the west and south of the Fox River Valley in places like Lee, Grundy, and Livingston (among other) counties in northern and north-central Illinois.

If you are interested in trying to see one of these beautiful birds for yourself, take a drive into the country and scan the fields for a white lump on the ground.  In the snow, it can be very difficult to distinguish a Snowy Owl from a pile of snow.  This is how I found my first Snowy Owl.  I was driving along a very rural road (be mindful of other traffic!) and scanning the fields.  I stopped as I saw something suspicious a couple of hundred yards out in a snowy field.  The friend who was with me asked why I was stopping.  I pointed out the irregular looking lump of snow as I broke out my camera with a long lens on it so I could take a closer look.  Even through the long lens, I wasn’t sure what I was looking at until the lump of snow hopped up and flew about ten feet!  It was pretty exciting to see our first Snowy Owl!

They’re in our area right now!

As I write this article a few days after Christmas, 2021, the Snowy Owls have made their way into our area.  I found a male high on a utility pole in rural Lee County (southwest of Rochelle) last week and others have been reported throughout our general area.  This winter is supposed to be an irruption year for the owls and so far it seems to be living up to its potential.  Anytime between now and March would be a good time to try your luck in finding a beautiful Snowy Owl in the Illinois countryside!  Even if you’re unsuccessful in your hunt for an owl, you’re likely to find other beautiful and unusual raptors that frequent similar areas like the Northern Harrier and Rough-legged Hawk!

Good luck in your search for a Snowy Owl and until next time, enjoy the natural wonders that our Fox River watershed (and close environs) present!

All photography courtesy of Tom Schrader