The Fox and the Owl 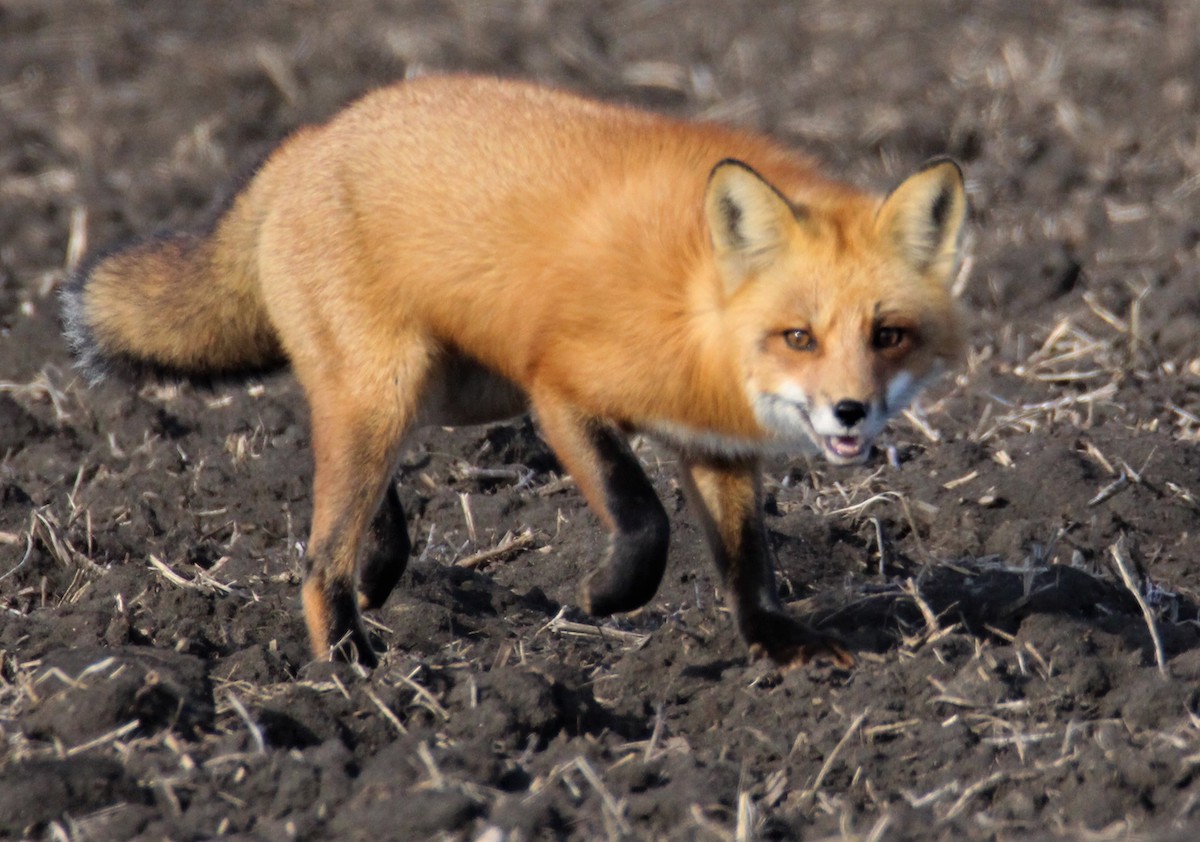 For this month’s edition of my Reflections on the Fox blog, I thought I’d relate a couple of incidents that occurred this past weekend (January 21-23), on a couple of my Snowy Owl safaris, that I found truly amazing.  It was a cold and snowy weekend that I thought would be perfect for Snowy Owl hunting: I was right!  Between going out on Friday and Sunday, I saw a total of six Snowy Owls!  While that made for an incredible weekend in and of itself, another couple of animal sightings made the weekend really unprecedented for me.

Another Player Enters the Scene

While I was leaving my Snowy Owl haunt in Lee County, I noticed some movement ahead in the field where I made my first ever Snowy Owl sighting.  As I got closer, I could see the movement resolve itself into two Red Foxes exploring along a grass waterway that runs through what had been a soybean field this past year.  Seeing a single fox anymore is a rare treat for me, as they seemed to have been in decline around my area since the coyote population has exploded.  Seeing two of them, during the daytime at that, and at relatively close quarters, was just amazing!  As I pulled up to within a hundred yards or so of where the foxes were trotting along the dry grass waterway, one of them dove into the crusted snowbank that covered the waterway.  The fox dove in as if he had sensed a mouse or vole that might have been scurrying along underneath the cover of the snow.

While the first fox was occupied under the snow, the second one turned his attention to me as he waited for his partner to emerge.  He seemed to be curious about the car and its strange occupant that had a strange-looking contraption emerging from his face (my camera!).  This fox didn’t seem to be too disturbed by my presence on the rural road but seemed more curious than anything.  I was about 100 yards away and his curiosity gave me an opportunity to get a number of good pictures of him.  Seeing and photographing these foxes was really the highlight of this day for me.  That’s really saying something after seeing four Snowy Owls earlier in the day!

More Visitors from the Far North

What happened on my subsequent trip looking for owls the following Sunday might have been even more remarkable than my experience on Friday.  It was a clear, cold, bright day after a light snowfall the night before that covered the area with a blanket of sparkling white snow.  The contrast between the azure blue sky and the dazzling white snow made for perfect conditions for photographing the Snowy Owls.  There was only one problem, although it was a big one.  The owls didn’t make an appearance.  As I criss-crossed the area for a couple of hours, I had pretty much resigned myself to the fact that it wasn’t going to be my day to get any owl photographs.  I decided to make one final pass past a corn crib where I’d spotted owls before, as the sun began setting in the southwest.  When I approached the corn crib, I could see the silhouette of a large bird on the cupola and I knew my luck had changed: it was a female Snowy Owl.

This owl and the Snow Buntings had already made my day, but what happened next was something that really intrigued me and has subsequently inspired me to begin to do some research, looking for similar reports/events.  As I approached the same spot where I had seen the foxes two days before, I noticed a Snowy Owl rise from the roadside ditch and fly off to the southeast.  While it was unusual for me to see an owl that close to the road, I didn’t think too much of it until I saw more movement from where the owl had left.  It was a fox!  Probably one of the two I had seen before.  I couldn’t see anything that he was eating or anything that might have attracted him to that spot, but it was exactly where the Snowy Owl had taken off!  I wondered what the fox and the owl had been up to?  Had the owl come upon the fox who had caught a vole and tried, perhaps successfully to pilfer it from him?  Had the fox come upon the owl and tried to steal her meal?  Or was it just coincidence?  My preliminary anecdotal research has uncovered a couple of stories about Snowy Owls and Red Foxes interacting in similar ways.  As I have historically seen several foxes in this area in the past, could the presence of the foxes be a draw for the owls to this area or is it more likely that both predators are there because there is a plethora of their prey present? Is there any evidence of a sort of symbiotic relationship between Snowy Owls and Arctic Foxes in their home range?  Lots of questions but so far I’ve come up with no answers!

It’s fun to speculate though and was amazing to see the interaction between these two amazing and beautiful species!  I’ll keep researching this phenomenon and post anything I might find about it in this blog in the future!

Until next time, keep enjoying the wonders of the winter season in northern Illinois and our beautiful Fox River Valley!

All photographs appearing in this article were taken by Tom Schrader on the weekend of
January 21-23, 2022 in east-central Lee County, Illinois.