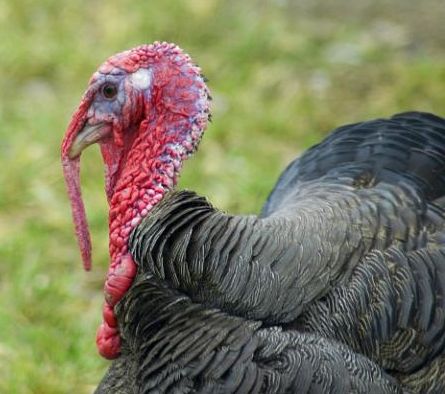 Homer Simpson once commented that turkeys are the only animals smarter than man (season 13, episode 3). He 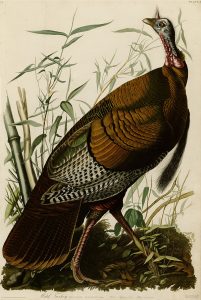 was wrong, of course, as there are no doubt others. But people and turkeys do share a special bond, if not an elevated IQ. The wild turkey is a highly recognizable, living-symbol of our country’s legendary beginnings. Turkeys, more than most creatures, are identified with our American heritage – both gobbling in our woods, and roasting in our ovens.

Wild turkeys live where there are nut-bearing trees. Acorns and hickory nuts provide a large part of their diet. They will eagerly eat large insects as well. Turkeys forage on the ground primarily at dawn and dusk, swallowing nuts whole and crushing the shells in their powerful gizzards. The remarkable strength of their gizzard can hardly be exaggerated. In one of the more bizarre moments of science, 18th century experiments proved turkeys are capable of pulverizing glass balls, grinding 12 steel needles, and flattening metal tubes with over 400 pounds of pressure in their gizzard!

Because of progressive, hands-on management of our natural areas, wild turkey populations are expanding. Groups 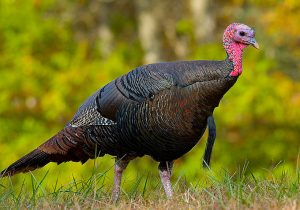 of as many as 10-20 turkeys, called “rafters,” are seen in numerous locations through the Fox River valley. The successful return of these majestic birds is due in large part to the time, energy, and money invested by thousands of people, including 38,000 Illinois members of the Illinois Wild Turkey Federation who have donated $1.6 million toward habitat protection and restoration projects.

Nature teaches us that all strands in the web of life are ecologically vital and important. Still, some of our watershed neighbors seem more special to us. Turkeys bring an extra helping of enjoyment and richness to our lives. They’re some of our tastiest neighbors and that is something to celebrate.

Jack MacRae is a descendant of Richard Warren of the Mayflower, who according to legend, enjoyed turkey at Plymouth.