Since I’ve received no dam questions this month I’ll take this opportunity to start a conversation about contamination of fish in Our Fox. 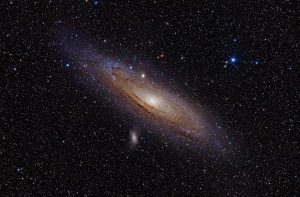 As Joni Mitchell famously sang at Woodstock, and astrophysicists now explain, we are all stardust. Every element in our body, all the carbon, oxygen, phosphorous, calcium and so on was created in the superhot explosions of dying stars ever since the beginning of the universe. So too mercury.

The public concern about mercury contamination in fish has existed since at least the 1960s. Minamata or “dancing cat” disease was identified in the Japanese city of the same name in the mid 1950’s. This was the first sign of danger. Heavy mercury contamination of fish from Minamata Bay caused by chemical plant discharge was found to be the source of the disease’s neurological syndromes. The symptoms were characterized in part by numbness, weakness, and vision, hearing and speech problems, with extreme cases resulting in insanity, paralysis, coma and death.

Mercury exists virtually everywhere in our environment. It rains down on us in the form of space dust. It has a long, storied history of production and use for at least 3,500 years. It has many and broad applications, from medicine to laboratory equipment to industrial production to firearms and more. Many of us have tooth fillings made from mercury amalgams or had our parents treat our cuts and bruises with “Mercurochrome”.

The Right Stuff in the Wrong Place

Like almost everything in our lives it is not the simple presence of a chemical, but the form and concentration and location of that chemical that should give rise to concerns. After all, water is fatal to the drowning man and the carbon dioxide that puts the fizz in our favorite beverages has been found to be a principal cause of global climate change.

The scientific community has worked for decades to understand the forms and concentrations of mercury that are of concern to human health. The results of that effort indicate seafood consumption to be a major source of human mercury contamination. Subsequently guidelines for fish consumption were set that, if followed, keep our mercury intake well below levels of concern.

The USFDA and USEPA have determined humans can safely consume 1 millionth of a gram of mercury per day per kilogram of body weight. Eyes glazing over

yet?  Based on body weight and type of fish consumed you can calculate your safe consumption rate if you know the “normal” concentrations of mercury found in the fish you have for dinner. (Pregnant women are a special case as the placenta has been found to concentrate mercury consumed by the mother, thus elevating the risk for the child).

The Fish in the Fox in You

According to fish tissue sampling data provided by the Illinois Environmental Protection Agency (IEPA), various fish species from the Fox have been tested for mercury since 1988. Presumably because of its high position on the Fox’s food chain the fish most frequently tested for mercury has been the smallmouth bass.

Seventy-five of the Fox’s smallmouth have given their flesh to science to test for mercury since 1988. Here is the result of that testing. 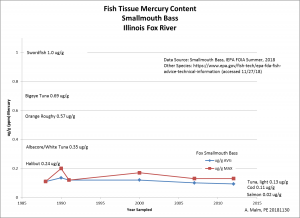 We can see from this chart the smallmouth in the Fox have been averaging about 0.12 ug/g (ppm) of mercury, with the averages (maybe) slowly declining. This concentration of mercury is on a par with cod and half the average level found in my wife’s favorite, halibut. This chart also shows the variation of mercury levels found in different species of tuna, and one reason salmon is so highly valued by nutritionists.

Here’s the bottom line. When considering how much of the day’s catch of smallmouth bass from Our Fox to eat, compare it to guidelines for the best “light” tuna, or the cod in your Friday night fish fry. I you’re pregnant choose salmon or other fish with very low levels of mercury. If you’re a geek visit the “mercury calculator” at http://seaturtles.org/programs/mercury/ where you can enter your weight and the type of fish to calculate how much you can safely consume every week.  Bon appetite! 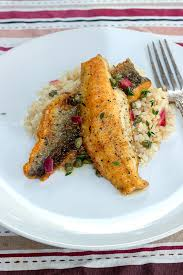