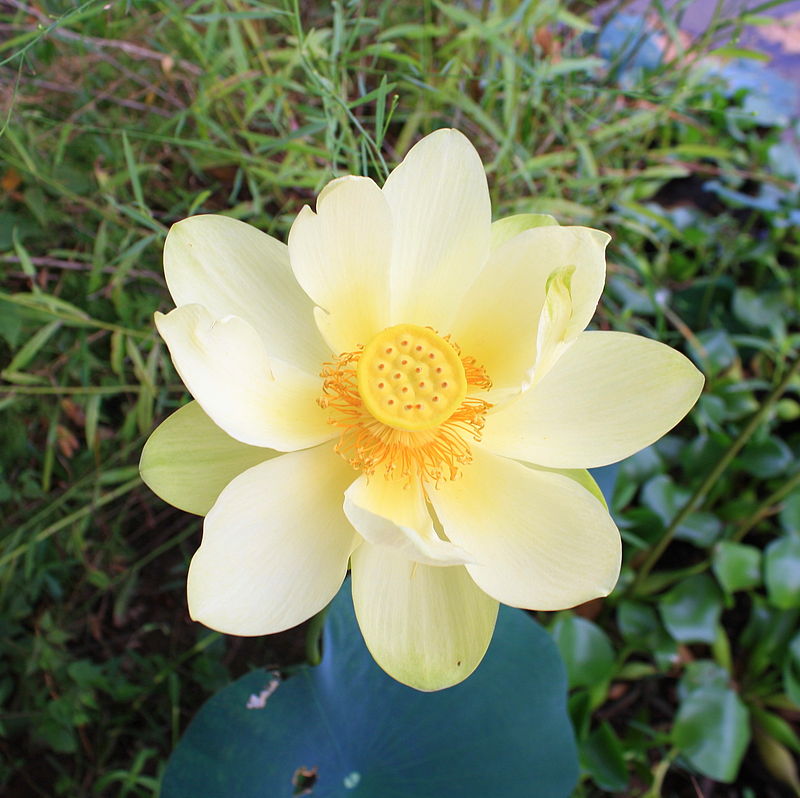 I once read that the American Lotus, Nelumbo lutea, “will make the soul forget the woes of the Earth”.  Sounds wonderful to me.

With its soft-scented, butter colored flowers and colossal green leaves, the lotus has inspired artists, poets, and spiritualists for centuries.

The Google Machine tells us there are endless narratives of these fabled flowers throughout the varied worlds of culture and religion.  Accordingly, the lotus represents re-birth, divine grace, purity, non-attachment, beauty, transcendence, prosperity of the soul, the unbreakable bonds of family, and rising above worldly chaos.  That is one special plant.

Locally, the American lotus should be blooming in a few weeks; the show will continue until mid-August in the sunny backwaters of the Fox River though Lake County.

And now, here is my usually bland description of these sacred plants:

American lotus is an emergent aquatic plant growing from rhizomes and tubers in muck and sand lake bottoms.  They 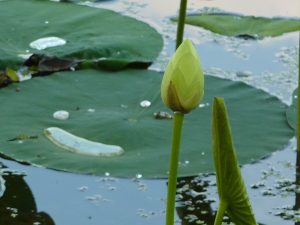 grow best in shallow, slow moving backwaters of rivers and lakes.  The plant can form dense colonies that cover many acres of the water surface.

Each lotus leaf rises through the water on a stout, 3 to 5-foot-long stalk, or more accurately petiole.   The leaf is flat, round, and can reach 24 inches in diameter.

Each lotus flower rises through the water on a stout, 3 to 5-foot-long stalk, or more accurately peduncle.   The flower is 4 to 8 inches across, a cream color with yellow stamens.  It will only bloom for a few days.  After blooming, the flower’s receptacle dries into a hard, brown pod containing a dozen or so seeds.

Historically, the boggy bottomed backwaters of the Fox River were the site of some legendary colonies of lotus.

In the decades following the Civil War, a large lotus colony growing in the shallows of Grassy Lake inspired 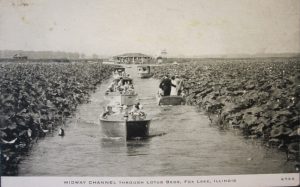 entrepreneurs to develop an early form of eco-tourism.  For several weeks each summer, steam powered paddleboats would carry visitors into and through the natural aquatic gardens.

For half a century, the lotus beds attracted tourists who filled the hotels that lined the lake shores.  Then the numbers of lotus began a steep decline.  Florists from Chicago collected the dry seed pods by the thousands, sediments and pollutants contaminated the water, and excessive, unregulated power boating destroyed the fragile waters.

A few bad floods during the 1920’s were devastating; no plants were seen during the summers of 1925 or 1926.  A slight increase was temporary and the flowers again vanished during the 1950’s.

It was not until the late 1970’s that American lotus returned to small areas of the Fox River Valley.