There’s a Predatory Insect in the Fox Valley! 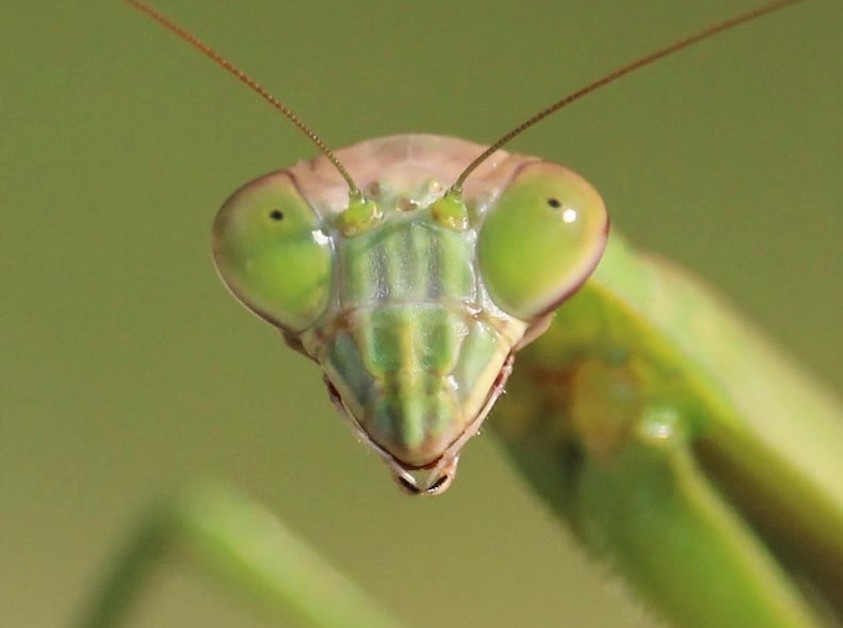 September marks the end of both astronomical and meteorological summer and the beginning of fall here in the Northern Hemisphere.  The days get shorter, the nights get a little cooler, and in our fields and prairies of the Fox River Valley area, September also marks the beginning of the breeding season for a very interesting and impressive insect: the Chinese mantis (Tenodera aridifolia sinensis).

These uber-predators of the insect world are the largest of the mantids in North America where the females can be up to five inches long (the males are slightly smaller).  They are also about the only species of mantis that we are likely to encounter in our area of northern Illinois.  The native and much smaller Carolina mantis, is typically found further south in central and southern Illinois.  As the name implies, the Chinese mantis is not a native to North America.  It was introduced back in 1896 in Pennsylvania.

The Chinese mantis can range in color from tan to green to brown or any combination thereof.  They have wings but only the males of the species can fly.  They are the largest of the “praying” mantises, called that because of how they hold their front legs (arms) in a position that makes them look like they’re praying as they wait to ambush their prey.  They are also one of the only insect species that can rotate their head up to 180 degrees and can look at you over their shoulders with their well-developed eyes.  They are sight hunters and put their eyes to good use when ambushing their prey.

In our area, I occasionally see Chinese mantis on my hikes starting early in the summer. Late summer to early fall (i.e. right now) marks the beginning of the breeding season and my sightings of these fascinating creatures increase exponentially.  I sometimes see up to 10 in one of my typical two-hour hikes along one of my favorite trails through the prairie at Hoover Forest Preserve in Yorkville at this time of year.  The mantis seems to prefer waiting in ambush near the top of Canadian thistle and goldenrod plants, positioning themselves on the main stalks just underneath the plant’s blossoms, putting themselves in position to catch insects like flies, butterflies, moths, and even the occasional hummingbird.

After breeding (where the female sometimes kills and eats the male after doing the deed), the female Chinese mantis lays up to 150-180 eggs in a foamy, cocoon-like egg case called an ootheca.  She constructs her ootheca on the stalk of a plant, a rock, the side of a tree, or even the side of a structure like a house.  The eggs hatch in the spring as nymphs that quickly grow into adults.  The adults live quite a long time for insects (from six to eight months) but do not survive the winter.

Some people believe the Chinese mantis serves a good purpose in controlling insect “pests” within their domain.  The jury is out, though, on the overall effect of the invasive Chinese mantis on the balance of the local ecosystem.  They are voracious predators that don’t seem to discriminate as to what species they prey on and can be a threat to beneficial pollinating species too.

One thing that’s beyond dispute, they are fascinating bugs that are interesting to encounter while spending time outdoors.  Next time you’re outside walking in a meadow or prairie along the Fox River, be on the lookout for a Chinese mantis.  You may find one that’s just as interested in looking at you!

All photos were taken by Tom Schrader

1 thought on “There’s a Predatory Insect in the Fox Valley!”