Meet Your Neighbors: Crust Fungus Among Us 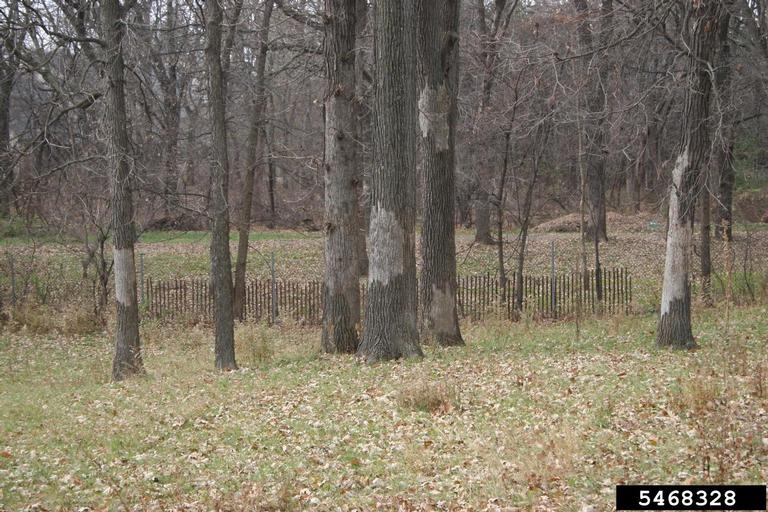 There are not too many forms of fungus you can spot from 60 yards away.  But the next time you’re visiting your favorite ancient oak woodlands 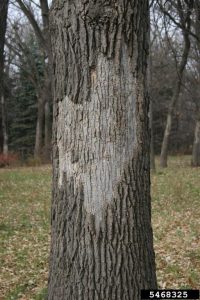 in the Fox River’s watershed, take note of the wide, pale gray bands of smooth bark on the trunks.

I grew up calling it “cow rub”, but perhaps that was just my family’s term.  The marks are actually made by colonies of Aleurodiscus oakesii, a saprophytic (lives off dead things) crust fungus that is actively decomposing the roughly furrowed, non-living outer layer of bark.

Don’t fret about the tree.  Despite the appearance, there is no internal damage and the trees are not harmed by this minor plant pathogen.  The fungus is most apparent on white oaks, but it can be found on other tree species such as elm and chestnut. 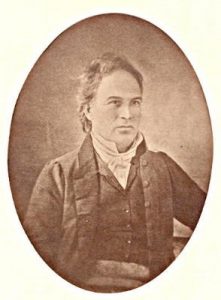 Interesting – to me at least – is the odd coincidence involving the binomial nomenclature of this organism.  The “generic” name, Aleurodiscus, refers to the shape (disc) and appearance (whitish) of the fruiting bodies of the fungus.  Oddly, the “specific” name, oakesii, is NOT named for its relationship with oak trees.   Rather, the plant was named to honor Billy Oakes, an early American Naturalist who spent years documenting the flora and fauna of the White Mountains of New Hampshire.

Winter’s an especially easy time to see, as Terry Noland so memorably put it way back in 1958, the fungus among us.