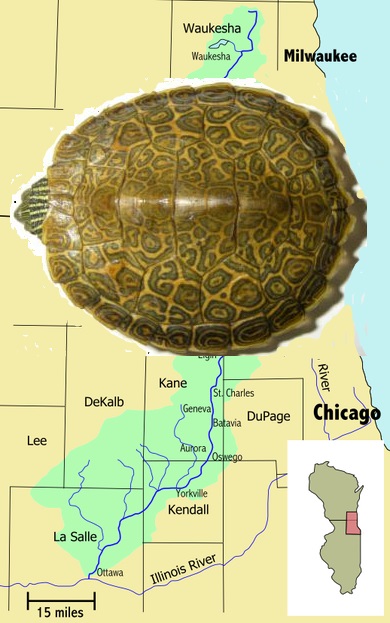 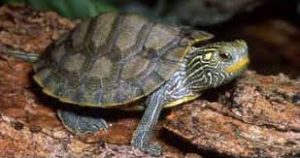 Map turtles receive their name from the thin, yellow squiggly lines that cover their shell and resemble a topographic map.  Their carapace (top shell) has a cool, knobby ridge.  They have large yellow stripes and trendy swooshes on their necks.  They’re really pretty.

One notable characteristic of the map turtles is their extreme sexual dimorphism in size. Girls are much bigger. A full grown male may be only half as long – and 1/10th the 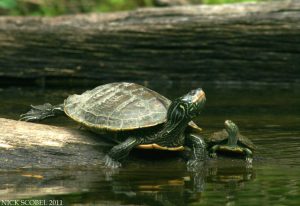 body mass – of a mature female. This leads to a decidedly different diet between the sexes. The girls use their more muscular jaws to crush large mussel shells.  The boys eat smaller prey such as aquatic beetles and other macro-invertebrates.

Map turtles typically forage for food during the cool summer mornings and devote their midday hours to lying on logs and soaking up rays with their fellow chelonians.

Wary to the extreme, map turtles spook easily and dive off their solar energy platforms at the slightest disturbance. They’re usually the first turtle in the water.

1 thought on “Meet Your Neighbors: Map Turtles Don’t Get Lost!”