What Were You Doing 30 Years Ago?

Maybe you were getting a new job, traveling, going to school, still in diapers, or maybe you weren’t even been born yet. Lucky for us that founder of the Friends of the Fox River (FOFR), Pat Reese was visioning a better world for Fox River invertebrates, fish, birds, and the people who reside in the watershed.

Pat had returned to the Fox River valley as a war veteran, fisherman, and citizen. These three components of his life ignited an incredible passion to defend the Fox River. His strategy involved developing an organization that could “serve the public as a mediating institution between citizens and government, giving river advocates a collective voice” (Pat Reese, 1995).

Pat Reese loved to wade the river while stalking fish, however he was often disgusted by it. That’s because the upstream

wastewater treatment plant was unable to handle all the sanitary and storm water during heavy rain events forcing it to bypass and dump raw, untreated sewage into the Fox River. When he saw that a stream bank was cleared of 100+ mature shade trees that had provided habitat for fish, he got angry to the point of action.

Upon approaching the city council, he learned that the Fox River was lacking a voice, and even an awareness of its needs. He had followed the river defender exploits of “The Fox” for the past decade, and felt a similar passion get ignited. That was the birth of the Friends of the Fox River.

Pat was inspired by his brother’s non-profit organization, using that and models of the McHenry County Defenders and Friends of the Rogue River to develop a foundation layer to build upon. In short order he assembled a skilled, resourceful, and effective team which included students, teachers, professionals from many fields, a diversity of financial supporters, and an effective and powerful board of directors. Everyone that he met was a potential resource. His selfless nature and quite intense dedication were infectious. Few could say no to this warrior.

In just a few short years:

Using the FOFR citizen science model, Pat and his team influenced the Lt. Governor to create a statewide program, Illinois RiverWatch. And the city council where Pat began had formed a Fox River Task Force.

30 years later, some of us are still with FOFR. Billita Jacobsen, the original newsletter editor and passionate community activist is our strongest advocate for the Schweitzer Environmental Center.  Doug Williamson and I were on the original Education Advisory Board, where we are again today and we are also current board members. Brooke McDonald fathered our very successful Water Quality Monitoring Network, and now is the CEO of one of our sister organizations, the Conservation Foundation. Many of the original and early contributors are still FOFR members.

Much Has Changed Since the Beginning

Today, the Fox River is recovering in a (painfully) slow and steady fashion thanks to the initial efforts of FOFR and a long

list of other organizations, agencies, municipalities, and individuals. The role of FOFR as the scientific authority has been transferred to the (20-year-old) Fox River Study Group. The mothering of watershed groups has been assumed by the (24-year-old) Fox River Ecosystem Partnership. FOFR continues to be a leader in the educational initiatives and has worked with of over 30,000 students just in the past 10 years. We have developed many partnerships through our consistent and widespread clean-up events. Our work is crucial to protecting and managing the Fox River on a watershed scale.

Exercise Your Vote This Month

Much work is ahead. New threats to environmental legislation have emerged from the current federal administration. In the past three years, many protective agencies and legislation are being dismantled and these moves impact us locally. As an organization, we can do the groundwork here, but we need the tools. Probably your most significant work right now is educating and empowering fellow citizens in campaigning for governmental representatives that will be river and healthy planet advocates, exercising your river voice in the voting booth.

50 years ago, the “Defenders of the Fox River” was formed as a group of visionary citizens and professional planners. Later known as the McHenry County Defenders, and now the Environmental Defenders of McHenry County. You have been our organizational model, mentor, and partner for 30 years. Happy 50th Big Sister!

Help Us Blow Out the Candles and Make a Wish

FOFR was conceived and born 30 years ago thanks to Pat Reese and the posse he assembled. We have a long list of 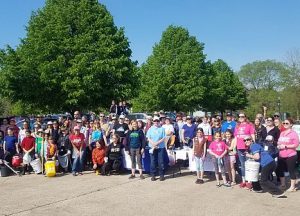 accomplishments, but our work is far from complete. As Pat knew, a single group, or even a collection of groups cannot protect an entire watershed. To do this we need a collective voice to guide our governments. FOFR was highly successful in the early days because many individuals shared their time and skills for a common cause.

To have a watershed-wide presence, we need everyone’s support. We need more than volunteers for clean-ups; we need help with operations in the office, with media, at committee tables, and in the field. We need community representatives to give us eyes and a voice in every section of the river. And we need financial resources to support our staff. Please visit our website to get involved and join us to Keep On Fixin’ the Fox for another 30 years. Help us make Pat Reese’s vision of river restoration come true.