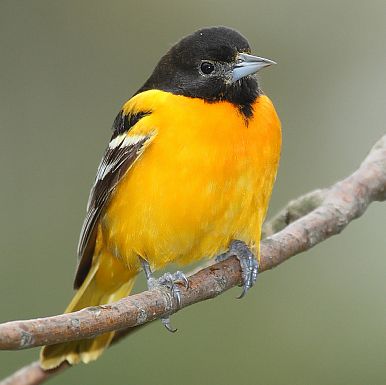 Few people realize that a fairly obscure Englishman nobleman named Cecil Calvert, (1605 – 1675) is directly responsible for the name of a major American city, the name of major league baseball team, and the name of a familiar neighborhood songbird. In today’s world Cecil Calvert is celebrated as Lord Baltimore. And, for the next several weeks, Baltimore orioles will return to our parks and yards after wintering in the warm tropics.

Baltimore orioles, with their orange and black feathers, are familiar to most casual birdwatchers.  The word oriole

comes from various medieval Latin terms for “golden”. The name Baltimore results from the bird’s resemblance to colors on the coat of arms of Lord Baltimore. Per usual, male oriole plumage is more vibrant than the softer hues of the female.

Look up for orioles. Baltimore orioles hang out high in the canopy, showing a preference for elms, maples, and cottonwoods.

You can spot them flitting through the leaves, clambering over twigs, and sallying out to glean tiny insects. Orioles are omnivorous and easily switch between a diet of insect, fruit, and nectar.

Soon after arriving in northern Illinois in the spring from Florida, the Caribbean, and Central America, oriole boys will woo oriole girls with their singing. They often choose a conspicuous position in their territory where the sun can illuminate their orange breasts. If the female is impressed by his real estate, she will pick out a site and construct a tree top house for their brood.

An oriole’s nest is a marvel of nature, constructed in stages over a period of days.  First, an “outer” bowl is made from 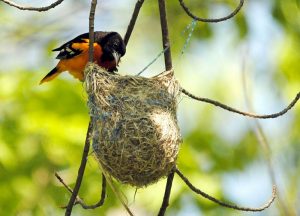 slender, woven twigs and stems, secured to an over-hanging branch. Second, an “inner” fiber bowl is woven inside the outer bowl, resulting in the bulging, sock-shaped structure. The final stage is to line the interior chamber with feathers and downy fibers to keep the eggs and hatchlings comfy.

A new nest is built each season, but the resourceful female oriole practices recycling and will use old nest materials in new construction. Pet hair, fishing line, bark, wool, and cellophane have all been used by orioles.

I have never been to the City of Baltimore and I haven’t paid attention to the Baltimore Oriole baseball team since they had Boog Powell batting clean-up in the early 70’s. (I’m not a fan of the American League since the designated hitter rule). But I do make it a point to look up for Baltimore orioles in my neighborhood! 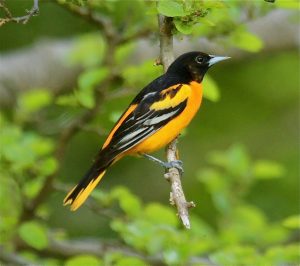