“Blues” Along the Fox 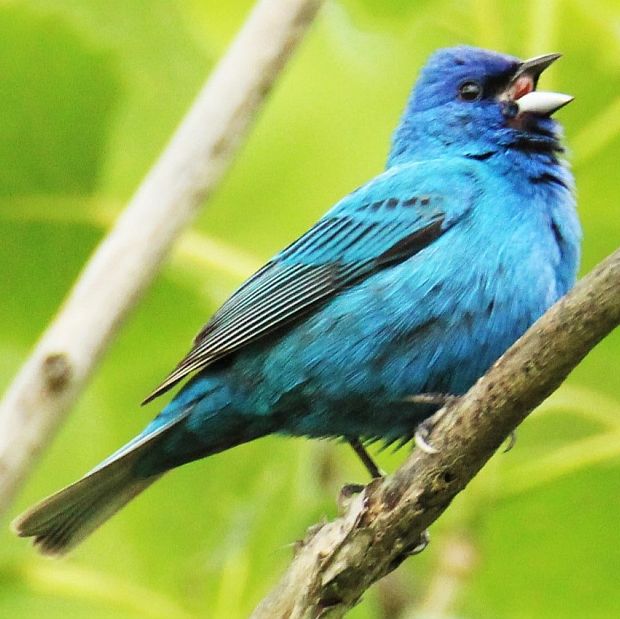 It’s July and with COVID easing, summer festival season is here! Many municipalities up and down the Fox River Valley have celebrated Independence Day and the beginning of the summer season with public events centered around good music and refreshing food and drink. However, the musical blues aren’t what I’m referring to in the title of this article.

As a birder, I celebrate this time of year for the return and relative abundance of some of the region’s blue feathered friends during the summer months. Blue Jays can be found year-round in our area but the color blue is a rather rare color for birds. Three beautiful and relatively observable migratory species can be found right now in prairies and woods throughout the Fox Valley region: the Eastern Bluebird, the Indigo Bunting, and the Blue Grossbeak.

The Eastern Bluebird is a popular little member of the thrush family that has long been a favorite of avid and casual birders alike. Their royal blue backs, reddish-orange breasts and cheery song add color and a general brightness to any place they frequent.

Eastern Bluebirds prefer to live in open areas like meadows and prairies or in forested areas that have a defined understory with many open clearings. Parks and golf courses are also favored haunts of the bluebirds.

During the summer months, they are primarily insect eaters but during fall and winter they eat various berries and seeds. These birds are cavity-nesters who have benefitted from the actions of concerned citizens over the years who built and put-up houses for these pretty birds to nest in. This has resulted in an increase in their numbers over the last 50 years.

The Eastern Bluebird can have more than one brood per season. Females are the primary nest builders and the sole incubators of the 2 to 7 eggs they lay per brood. The offspring from the first brood of the season usually leave the parents before the end of the summer but the later brood’s birds usually winter with their parents. We are at the northern edge of the Eastern Bluebird’s residential range but some bluebirds reside year-round in the Fox Valley, while others may migrate for the winter to the southeastern United States.

A highlight of any birding outing in the summer is spotting the vivid electric blue color of a male Indigo Bunting! The Indigo Bunting is a long-distance migrant that breeds in our area during the summer months and winters as far south as northern South America!

They share many attributes with the Eastern Bluebird, such as their primary diet of insects and berries, prefer similar habitat, and male Indigo Buntings do not participate in nest-building or incubating the 3 or 4 eggs laid per clutch in the 1 to 3 broods per year.

Male Indigo Buntings display beautiful blue plumage while the females are a more dull-brownish color. Interestingly though, like all blue birds Indigo Bunting’s feathers lack any blue pigment. Instead, the feathers have structures that refract and reflect blue light. While Indigo Buntings are still relatively common, their population has decreased around 30% over the last 50 years.

They usually arrive in our area in early July and are still a quite uncommon bird locally, so it is a real treat to see them here at the northern edge of their range.  Blue Grosbeaks prefer “edge” habitats like hedgerows, stream and forest edges, transmission line right of ways, and old fields driven by their diet of insects and both wild and cultivated grains. It’s likely that they only produce one brood per year in our area, with each clutch consisting of 3 to 5 eggs.

Next time you’re outside enjoying nature in the Fox Valley, keep your eyes peeled for flashes of blue in the woods and prairies.  If you want to get out and see some of these birds, Cornell University’s eBird is a great resource to find where they have been recently sighted in the area.

Until next time, enjoy our avian “blues” along the Fox!

5 thoughts on ““Blues” Along the Fox”