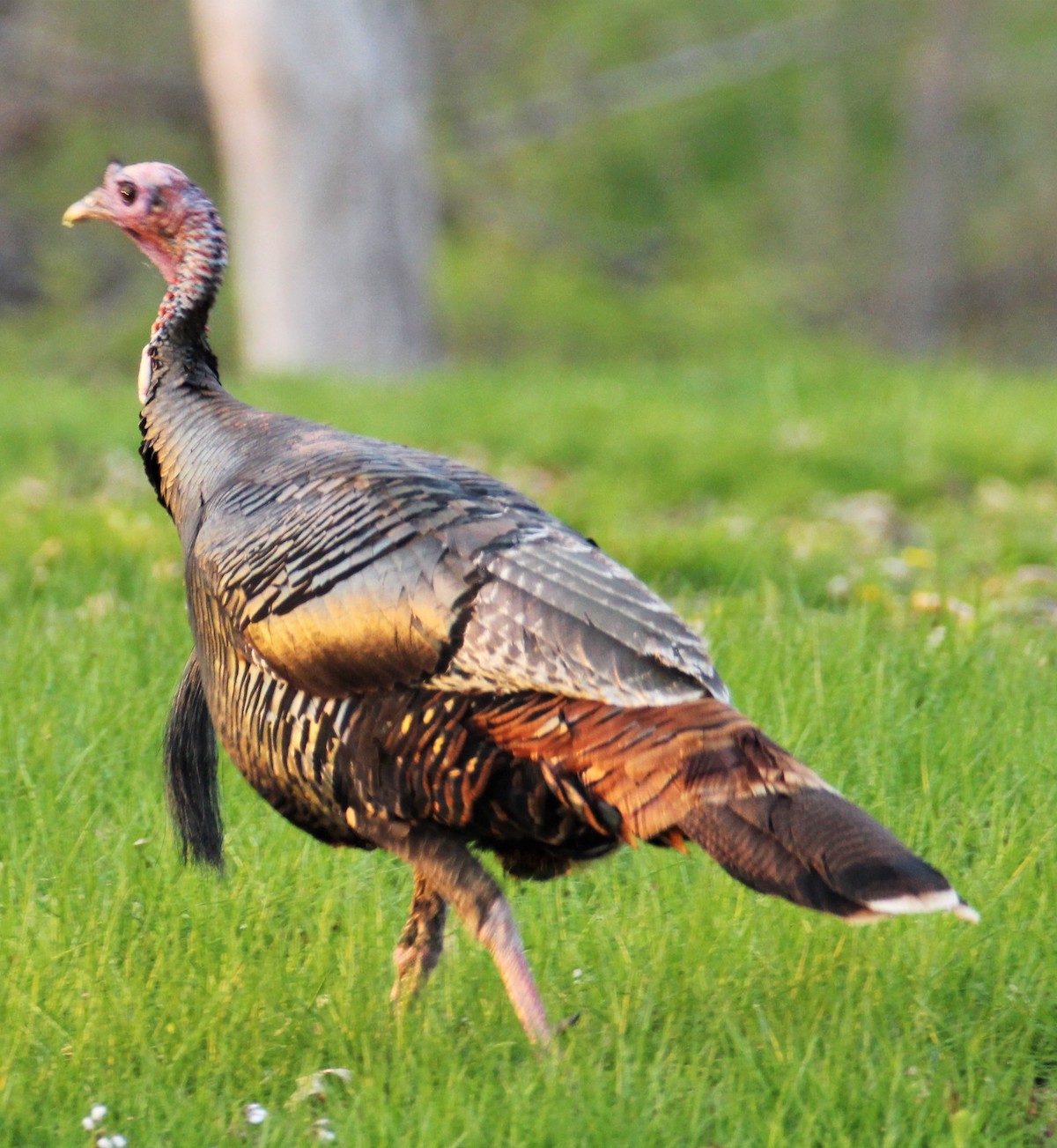 November is a month of change in the Fox River Valley.  The days grow shorter and colder, many of the migratory birds have left or are well into the process of leaving for warmer southern climes, and the growing season (and mosquito season!) have come to an end with the arrival of the Fall’s first hard frost.

The holiday season is fast approaching with Thanksgiving just around the corner.  The thought of the Thanksgiving holiday makes me reflect on the things I have to be thankful for: my wonderful family, my great friends, and our beautiful Fox River Valley ecosystem top my list.  I look forward to this holiday every year, not only to give thanks for all the blessings that have been bestowed on me, but also for the wonderful turkey dinner that traditionally marks the holiday celebration for me!  The thought of it already has my mouth watering!

The turkey that we eat for Thanksgiving is a domesticated version of the Wild Turkey that is native to North America and the Fox Valley.  By the early twentieth century, Wild Turkeys had been decimated over a large portion of their range due to over-harvest, because of their delicious eating qualities and habitat reduction.  However, in the past few decades, concerted reintroduction efforts paid off and Wild Turkeys have made an impressive rebound.  They are now a relatively common sight in our Fox River Valley.

Most people are aware that Benjamin Franklin at least purportedly lobbied for the Wild Turkey to be the symbol of our new nation rather than the Bald Eagle.  He admired the turkey’s guile and called it “a bird of courage,” well suited to represent the spirit of early Americans.  Wild Turkeys are quite resourceful and adept at thriving in their habitat, unlike their domesticated brethren that are not known to be the brightest birds in the roost.

I quite often encounter Wild Turkeys on my hikes in the parks and forest preserves along the southern reaches of our Fox River in Kendall County.  I have encountered lone males (called “toms”), small groups of toms, and larger groups of hens and their offspring called “poults” on my walks.  They are always wonderful to see!  Their feathers, particularly the males, shine with a beautiful iridescence in the sunlight.  Speaking of feathers, an adult Wild Turkey has between 5,000 and 6,000 of them to help insulate against the cold.

Close Encounter of the Turkey Kind

One of my most memorable encounters occurred this past late Spring on a hike in the Hoover Forest Preserve in Yorkville.  I was walking on one of my favorite trails in the western section of the preserve and had just emerged from a very wooded portion of the trail into a lovely meadow.  Along the meadow section of the trail ahead of me, I noticed a group of four or five poults loitering and pecking in the short grass of the trail.  When they saw me, most of them quickly disappeared into the tall native prairie grasses along the trail, while one flew up into the branches of a nearby tree.

Wanting to get a better look at the poults, I quickly walked to where they disappeared and stood still, looking intently into the tall grass.  After a few seconds of looking, an explosion of sound and fury erupted out of the grass aimed right at me as a very angry and protective hen came charging out!  She chased me down the path and loudly escorted me away from her poults.  Turkeys can run up to 18 miles an hour and it seemed like she did every bit of that!  It was quite an experience!

Hopefully you’ll run across some Wild Turkeys in your travels and hikes.  They are active in our area year-round and are probably easier to spot now and into the winter; a lot of their cover disappears in the fall and the snows of the winter make them really stand out in the fields.

Until next time, have a Happy Thanksgiving and enjoy the natural wonders of our beautiful Fox River Valley!


All photos were taken by Tom Schrader