Mothers in the Wild 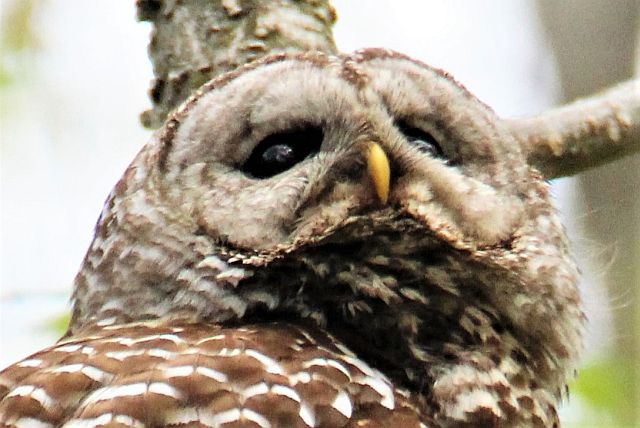 I know Mother’s Day had been a day of work and celebration for Friends of the Fox River (FOFR) for several years and, in honor of that, I’ve decided that the theme of this column will be focused on a devoted mother of the forest that I have come to know: a barred owl.

My hikes take me through numerous parks and forest preserves in the watershed and along the Fox River. I have often encountered the eerie calling of barred owls in the preserves that I hike.  Barred owls have one of the largest “vocabularies” in the avian world, but their classic “Whoo cooks for you” call is one that commonly resonates through the forests along the river.

While I often hear them, spotting them is a much more uncommon and difficult proposition.  This spring, though, I ran across a nest tree of a barred owl family in a natural area along the lower Fox River and have monitored the nest and the progress of the family on a regular basis since then.

In the Fox River valley, barred owls typically set up their nests in March (usually in a tree cavity but they also utilize old nests of red-tailed Hawks, squirrels, and crows on occasion) and lay 2 or 3 eggs in mid to late-March.  The mother owl incubates the clutch of eggs that typically hatch in 28 to 33 days.  After the eggs hatch, both mom and dad work together to feed their growing family a diet of mice, voles, and other small animals including small snakes and, perhaps surprisingly, crayfish!

The young owlets grow quite quickly and within four to six weeks of hatching are ready to leave the nest for their first foray in the outside world.  While not yet ready to fly, the owlets’ talons are well-developed and strong, and they use them along with their powerful beaks to climb up or down their nest tree (or an adjacent one if they fall or climb down to the ground) in an activity known as “branching.”  At this stage, the young owls perch on a branch and observe the world around them.  They are still dependent on mom and dad to bring them food at this stage.

At ten to twelve weeks, the young owls typically fledge (learn to fly) which increases their mobility greatly.  While their increased mobility makes them a little more independent, they are still not nearly ready to face the world on their own and stay with their parents for up to six months: one of the longest periods of time among the owls of the world.

The barred owl family that I have been observing this spring is anchored by a very devoted mother.

While incubating the eggs she spent nearly all her time in the nest, leaving only for very short periods to feed.  Some have theorized that the male owl shares in incubation duties but that hasn’t been confirmed and I never observed the male in the nest during the time the eggs were incubating.

Barred owls are usually night feeders but will also hunt during the day. They typically perch high in a tree and keep watch over the area they are hunting, using their great eyesight and keenly developed sense of hearing to locate their prey.  Once they have, they swoop down off their perch in strong, silent flight to capture their unlucky prey with their powerful talons.

As you walk or bike along the river or in a local forest preserve, slow down and keep your eyes and ears open. Sights and sounds like the barred owls, along with many other natural wonders are present in many spots in our area.  These beautiful features provided by Mother Nature can add so much to our quality of life if we slow down our fast-paced lives long enough for them to be revealed to us.

Until next time I talk with you, enjoy your time enjoying nature along our beautiful and mighty Fox River!

*Some of the facts referenced in this article (nesting habits, food preferences, incubation period, time to branching, and time to fledging) were reported in “Ten Fun Facts About the Barred Owl” by Neel Dhanesha, February 12, 2021, Audubon Magazine, on www.audubon.com.

Note – All photographs by Tom Schrader.

2 thoughts on “Mothers in the Wild”